Last Chance To Show Your Support: 'Rock Run' Is Saturday!

"I hope you and your families know, how much you are appreciated."


It's a simple but powerful message, and it still stands months after Henry delivered it to the families of The Royal Marines. Henry made his first public appearance as ambassador for the charity that supports them in May, and now he's getting ready to represent them again. He's taking on The Rock of  Gibraltar this Saturday, to raise money for The Royal Marines Charitable Trust Fund. So what exactly is he in for? -- we'll let local athlete Chris Walker give you an idea:

The Top of the Rock run is basically a 2.75 mile run from sea level to the top of the Rock of Gibraltar which is approximately 1000 feet. The first 0.25 miles is flat and then the remaining 2.5 miles is all up hill, starting at a grade of 25 percent. I have always run the distance in one go rather than split it up into sections as I know that if I was to stop at any point I would not get going again!
The run takes in some of the most spectacular scenery of the Spanish coastline to Tarifa and also of the Atlas Mountains over the Straits in Morocco which does take away some of the pain of the run. 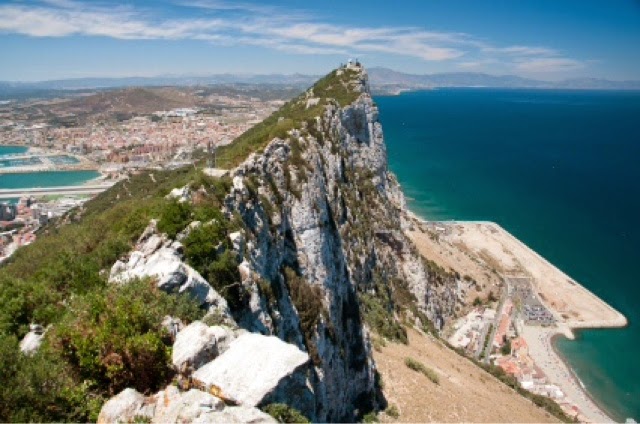 Not exactly a joy run. Yet Henry is taking a break from his busy filming schedule to participate, because the RMCTF is a cause close to his heart. His brother Nik is a Royal Marine who will join Henry in the event.

Henry is nearing his goal on his official fundraising page, but he still needs a little push to get him to his target. This is your chance to cheer him on with your messages and support. We'll be in Gibraltar to bring you updates from the run and talk to Henry about his involvement with the charity.

Your Gibraltar TV has just released an updated schedule of events happening this weekend. They say Henry will be presenting the award for 'Best Dressed Marine' at a children's competition before the run:

A number of events have been planned for the weekend including a 2.4 km Postal Fun Walk on Saturday for anyone who wants to join in and a children’s competition for the ‘Best Dressed Marine’, the prizes for which will be awarded by actor Henry Cavill prior to the walk. Sign up on the day will be 09:30 at Casemates and it will cost £5 for children or £10 for adults. All participants of the Postal Walk will receive a medal for their efforts. Children can turn up on the day dressed as a Royal Marine for the £5 entry fee but do not have to take part in the walk.

Hundreds of runners from all over the world are coming to Gibraltar this Saturday to take on the challenge of the infamous Rock Run whilst raising money for charity. Late entry runners can sign up on the day at 0930 in Casemates, the cost is £35 which includes a Race T-shit, bespoke medal and lunch after the event.

The Royal Marines Band will entertain the crowds before the run and walk and a warm up session will take place before walkers and runners depart Casemates Square at 10:50 with the Re-Enactment Society heading to John Mackintosh Square for and 11:00 start.

A Freedom Parade will take place on Sunday following a Service at the RM Monument in Ocean Village at 1200. The final event will be the Royal Marines Band Concert with support from the Royal Gibraltar Regiment Band. The concert will take place in St Michaels Cave and start at 20:00. Tickets are on sale now in John Mackintosh Hall, the last day for tickets will be Friday 24th.