Warner Bros. Sure Knows How To Make A Splashy Entrance 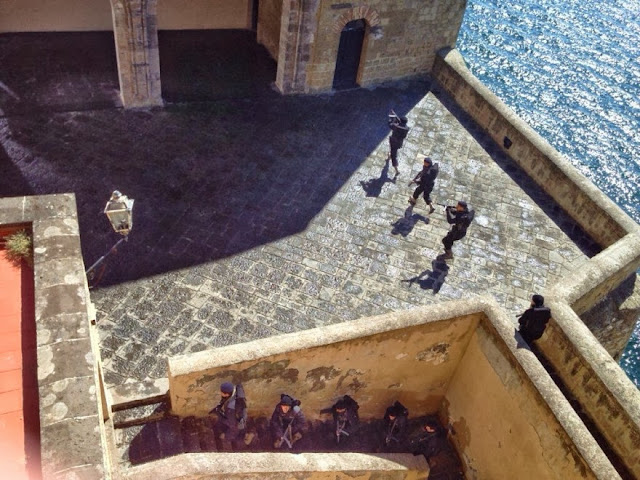 CHECK OUT THE FIRST PICS FROM THE SET 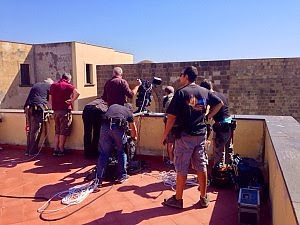 La Repubblica is reporting that filming has begun on The Man from UNCLE in Italy. So far it seems it's the second unit doing all of the work. Apparently they are shooting at Castel dell 'Ovo, which we told you more about in this post. The newspaper says the castle has been off limits throughout the day, but only in the areas occupied by the crew.

They are reportedly filming an action scene that we had heard about before, in which a group of special forces conducts a raid of the fortress, battling it out with gunmen there to protect the mysterious criminal who is hiding inside. Guy Ritchie was spotted earlier in the day, enjoying a day off with his family. And Armie Hammer's wife shared this great picture of their family, including their cute dog as they explored Pompeii. 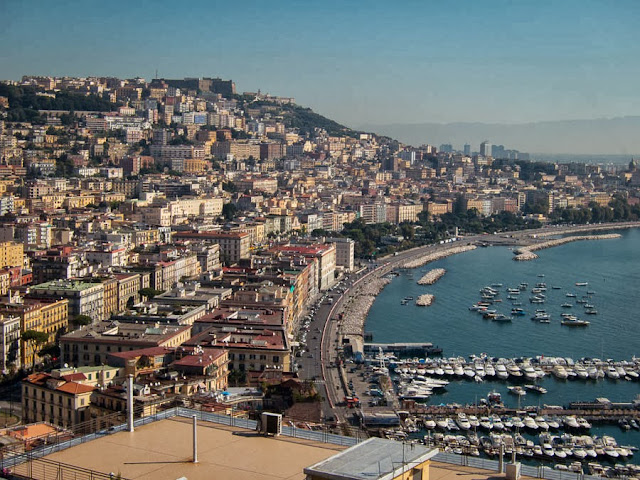 So where's Henry? we're guessing doing a bit of relaxing himself.. or not. His trainer Mark Twight posted this gorgeous bird's eye view of Naples after a bike workout in traffic (we salute him for his bravery). It also means Henry is not too far away. Filming with some of the main cast is expected to begin tomorrow. ANSA has a bit more details from today, and something we hadn't read before about the reported plot:

The plot set in the Cold War follows Solo who sneaks into East Berlin to track down the daughter of a missing former Nazi scientist who's capable of creating an atomic bomb.

"Sneaks into East Berlin?" that sounds a lot like last week's set pics. All of it exciting!

Now it's looking like Thursday will be a big day on set. That's when the area between the pier and the dock of Pozzuoli will reportedly become a movie set. Cars and pedestrians will be kept at a distance and even fishermen will be escorted in and out of the area. The ferries will continue to run as normal, but there will be tight security on set. Police & the Coast Guard will be patrolling the water, and they'll even have a team of divers with them to make sure the area is secure during filming. Not only that, Warner Bros. has also reportedly hired a private security service to watch over the set. The scenes will be shot rain or shine.
This set is expected to involve about 400 people, including actors and production workers. Henry, Armie, and Hugh Grant are supposed to be there. Stay tuned for updates as we get them. 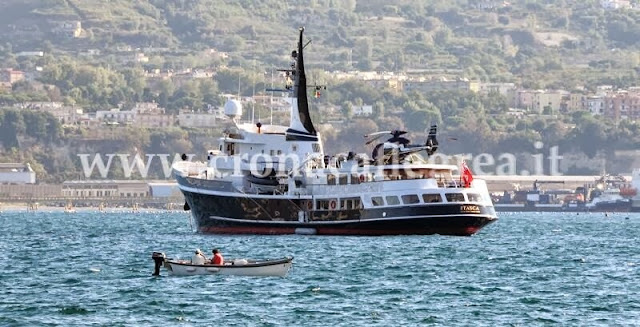 If this doesn't flag you that Hollywood has arrived, don't know what will!

Warner Brothers is reportedly the current tenant of the Itasca, now floating off the waters of Bacoli, as cameras on The Man from U.N.C.L.E. get ready to roll. Cronaca Flegrea has more pictures and details of the yacht, and its colorful history. You can see it even comes with its own helipad.. nice. Want to take a look inside? check out this cool video we found. We're very jealous of Henry, who at some point will probably get to ride in it. The newspaper also shared this pic of what its calling one of the first places where scenes will be shot along the coast of Pozzuoli. It looks like "Vinciguerra Shipping" is what they were building in these photos. See another pic of the cool retro pier entrance at their site. 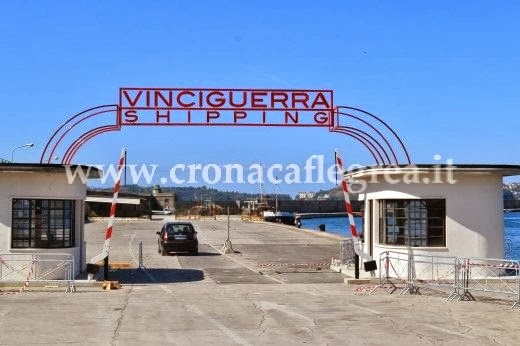 More details as we get them!

Email ThisBlogThis!Share to TwitterShare to FacebookShare to Pinterest
Labels: All About Henry, Italy, Napoleon Solo, News, Production, The Man from U.N.C.L.E