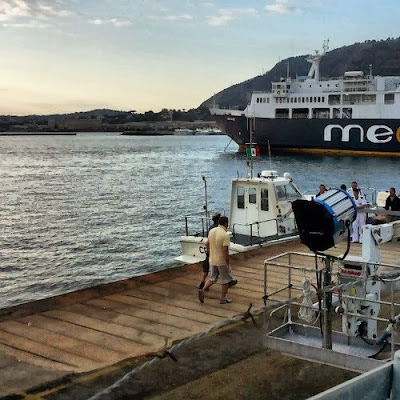 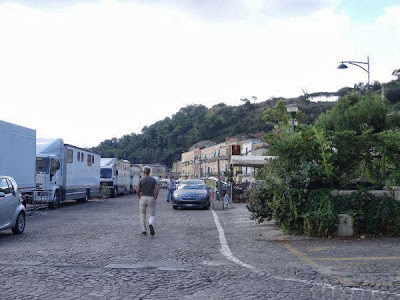 Henry and Armie have been hard at work on the set.. or make that the sets, of The Man from U.N.C.L.E. in Naples. According to Cronica Flegrea filming is taking place at separate locations in the area, including the Port of Pozzuoli and Villa Ferretti, which we told you more about in this preview.

MUST SEE---> PICTURES FROM THE SET AT VILLA FERRETTI

GUY RITCHIE ON SET IN POZZUOLI

MORE PICTURES FROM THE SET AT THE PIER

Close to 400 people are part of the massive production, including about 100 workers from Rome and Naples. Stuntmen and acrobats are also taking part in the most dangerous scenes, that involve raiding the castle where the bad guy is supposed to be hiding. Some of that work began Tuesday, check out those pictures, and a closeup look below. Where are you Solo? ;) 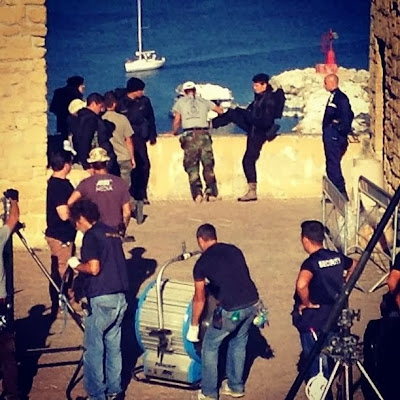 Today filming reportedly involves a high speed chase with an SUV that goes up a tunnel towards a lighthouse. You can read more about that in this post. Cameras have also been rolling at Villa Ferretti, where a scene includes several small boats arriving on the beach. According to the paper, tomorrow filming will continue at the nearby Baia Castle, and we will apparently also get a first glimpse of the iconic chopper used in the Bond series. Phew.. a lot of movie magic in a short amount of time. That's Hollywood for you!

We have heard from fans that have either met (and hugged Henry).. or just spotted him during filming.

@Jadis6277: I hugged Henry Cavill. And I spoke with Armie Hammer. It's been four hours and I still can not get over the shock.

‏@__dancingqueen: @HenryCavillNews hi there. I saw Henry from far. He's so sexy but I didn't meet him :( - I saw some shoots very cool (..) he was in a blue suit. Sexy as always.

We are so happy for each and every one of you who get to experience a film being made, because we can guarantee it will make it a much richer experience when you watch it on the big screen. Thanks for sharing the details with the rest of us who can't be there to cheer on Henry. More U.N.C.L.E. updates on the way!

As always, thanks Giulia. x

Email ThisBlogThis!Share to TwitterShare to FacebookShare to Pinterest
Labels: All About Henry, Italy, Napoleon Solo, Production, The Man from U.N.C.L.E