Henry Cavill Is A Sweetheart: Jessica Shares Her Story & Pics

As 2013 comes to an end, we've put together all the fan stories from the past year for you to read. It's our favorite part of supporting Henry, knowing he's so nice & giving with everyone he meets. Jessica got a chance to meet him in June, at the world premiere of Man of Steel in New York. She shared her story and pictures with us. Hope you enjoy! 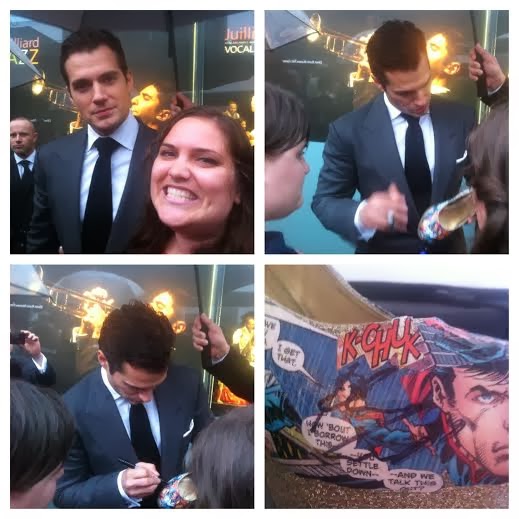 I met Henry at the Man of Steel premiere. I wasn't actually thinking I'd get to because the weather was so bad (it was pouring rain all day) but an hour before the premiere started, someone came out to say that Henry would be out there shortly. I was impressed that he would even make an effort to come to his own premiere early just to meet fans, and he did. I watched as he made his way down the line, taking time to speak with and meet everyone. I actually took a picture for someone else and afterwards told the girl I thought it might have been at an awkward angle. At that point, Henry took the phone from me, looked at the picture and said, "Ya, it is a bit awkward." So he asked someone else to take the picture for them and handed the phone off. He didn't have to do that, he could have ignored me and kept moving, but instead he took the time to make sure the picture was quality, which I thought was precious. When he got to me I asked him if he would sign something for me and take a picture and he smiled and said "Of course". After the picture I brought out the shoes I had made ages before the premiere (when I first heard Man of Steel was being made. I'm also a huge Superman fan). He was impressed and asked me about them, how long it took and what not, laughing and saying I was clever when I told him I named them my Man of Heels. After he signed my shoes I thanked him profusely, and he thanked me, shook my hand and moved on.
Right as Henry was about to go in to the press line, one of the friends I was with didn't actually get an opportunity to meet Henry because she had been pushed out of the way by other people. We were both talking about what a shame it was that she didn't get a picture when the person next to us overheard and shouted, "Hey Henry! This girl didn't get a picture!' at first we were both embarrassed but he looked at both of us and asked my friend if it was true and she said yes. Without hesitating he smiled and moved back over to us to take one last picture. He really didn't have to do that for her, especially because people were trying to usher him inside, but he did, which I think was totally amazing and says a lot about his kindness.
Anyways, that's my story. I just wanted people to know that besides his pretty face he's also a genuinely decent person. Have a lovely day!

Thank you Jessica for sharing your awesome story and pictures. We love the shoes! that btw everyone, she has on etsy, and isn't Henry the best?!

If you have a story/pic to share with fans please email us at henrycavillnews@gmail.com or reach out to us at @HenryCavillNews. We love supporting Henry and can't think of a better way to do so, than to showcase what a true gentleman and humble guy he is. That combined with his hard work and talent, make him a true star in our book.

Email ThisBlogThis!Share to TwitterShare to FacebookShare to Pinterest
Labels: Fan Support, Henry Is Such A Sweetheart, Man of Steel, New York, Premiere