No 'Batman v Superman' At Comic-Con? Not So Fast.. 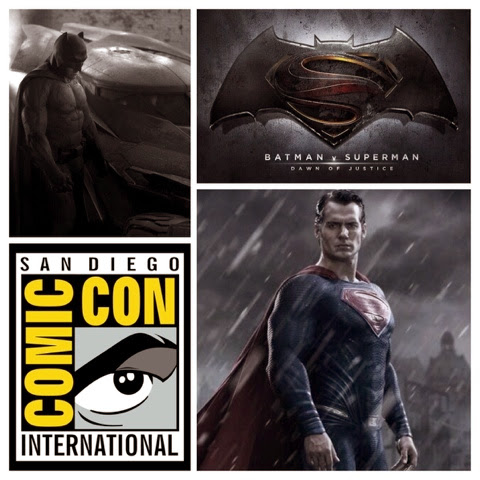 We're exactly two weeks away from the start of Comic-Con, and Warner Brothers has announced what it plans to bring to San Diego. There was no mention of Batman v Superman, but don't freak out just yet!

Studios normally keep mum on big reveals, so we're thinking there's still a chance they have something brewing. Last year director Zack Snyder walked on stage at Hall H and delivered a whopper of a surprise: confirmation that Batman v Superman was in the making. So we can't imagine they wouldn't follow that up with something awesome. Then again, since the film doesn't come out until 2016, they do have next year's con to bring the excitement. We'll be at Comic-Con bringing you updates. For fans headed to San Diego, there are plenty of great panels relating to Superman and Batman's 75th anniversary. We've highlighted some of them in the official press release.

BURBANK, CA, July 8, 2014 -- Warner Bros. Entertainment will plant its flag at Comic-Con International: San Diego this year with a huge presence, with each individual division touting its upcoming offerings, including Film, Television, Interactive and Home Entertainment, as well as a variety of product from DC Entertainment, whose celebrations in honor of 75 years of one of the world’s most beloved Super Heroes—Batman—will be in full swing.

On Saturday, July 26th, beginning at 10 a.m., Warner Bros. Pictures brings three of its most hotly anticipated films to this year’s Con: Peter Jackson will be on the main stage with “The Hobbit: The Battle of the Five Armies,” from New Line Cinema and Metro-Goldwyn-Mayer Pictures, and George Miller will be on hand to present a first look at “Mad Max: Fury Road,” from Warner Bros. Pictures and Village Roadshow Pictures. The Hall H audience will also get a peek at the Wachowskis’ original sci-fi actioner “Jupiter Ascending,” also from Warner Bros. Pictures and Village Roadshow Pictures. Attending stars will be revealed at a later date.

In addition to the Studio’s Hall H presentation, Warner Bros. will also host a pre-Con fan screening of New Line Cinema and Village Roadshow Pictures’ upcoming “cli-fi” thriller “Into the Storm,” directed by Steven Quale. The screening will take place on Wednesday, July 23rd, at 10 p.m. at the Gas Lamp Theatre.

Warner Bros. Television Group returns to Comic-Con with 15 series in 2014, holding panels throughout the four days of the Con for fan-favorite series including “The Big Bang Theory,” “The Following,” “Supernatural,” “The Vampire Diaries” and “Teen Titans Go!,” among many others, as well as once again kicking off the Con with screenings of new series “The Flash,” “Constantine” and more on Wednesday’s Preview Night.

On Saturday night, July 26th, it’s all DC Entertainment all night in Hall H when Warner Bros. Television treats attendees to a three-hour special event designed specifically for DC Comics fans and featuring some of DC Comics’ greatest characters. The event will run from 8:00 p.m. to 11:00 p.m. and will feature the world premiere public screening of the highly anticipated new drama series “Gotham” (the only screening of “Gotham” at this year’s Comic-Con), followed by a screening of the complete pilot of “The Flash,” and exclusive video presentations from returning hit “Arrow” and new thriller “Constantine.” Cast members and producers from all four shows will make special appearances throughout the three-hour event. For complete information on Warner Bros. Television’s plans for Comic-Con and for real-time updates during the convention, please follow us on Twitter at @warnerbrostv—official hashtag #WBSDCC—and visit http://comiccon.thewb.com.

In concert with all the WB divisions, DC Entertainment continues to fête Batman’s 75th year, making the icon the centerpiece of their offerings, including all-star panel appearances by Batman talent as well as a rare display of some of the canon’s most famous film costumes in history—those worn by Christian Bale, George Clooney, Val Kilmer and Michael Keaton—on display in the DC Entertainment booth. The character will also appear on the cover of the Con’s official souvenir book, and on a Con-exclusive T-shirt designed by DC Entertainment Co-Publisher and legendary artist, Jim Lee.

In addition to their numerous other activities, including 20 panels over the course of the Con, the company will also reveal plans for numerous upcoming titles for DC Comics, Vertigo and MAD Magazine imprints, as well as unveiling new action figures from DC Collectibles, including those commemorating The CW and WBTV’s “Arrow” and “The Flash,” as well as a stellar new line based on the upcoming videogame “Batman: Arkham Knight,” from WBIE.

Warner Bros. Interactive Entertainment, in celebration of the upcoming release of Rocksteady Studios’ “Batman: Arkham Knight,” will host the Cape/Cowl/Create art exhibit, open to the public daily from July 25th through the 27th, 12 p.m. to 7 p.m. at the Hard Rock San Diego Hotel’s Legends Room. This free public exhibition will feature true-to-scale replicas of the game’s cape and cowl used as a blank canvas by top contemporary artists to produce their own original interpretations.

On Friday, July 25th, at 12:30 p.m., WBIE and Monolith Productions will host a panel for the anticipated game “Middle-earth: Shadow of Mordor,” discussing how the game’s innovation evolves storytelling while exploring the history of the Rings of Power. Panelists will include Monolith’s Michael de Plater and Phil Straub, as well as the game’s lead writer, Christian Cantamessa, and voice actor Troy Baker, moderated by Professor Janet Croft.

And Sunday, July 27th, at 1:00 p.m., WBIE will also host a panel for “LEGO™ Batman 3: Beyond Gotham,” developed by TT Games, with an exclusive gameplay demonstration, character reveals, special announcements and a lively panel discussion with several members of the voice cast featured in the game. Also, throughout the Con, the game will be available for the first time for hands-on play by consumers.

Blanketing the Con from start to finish with entertainment and activities for fans, Warner Bros. Home Entertainmentcelebrates its coming release of Warner Bros. Pictures’ and Legendary Pictures’ summer blockbuster “Godzilla” with a four-day interactive display on the lawn behind Hall H. From Wednesday through Sunday, 8 a.m. to 8 p.m. each day, view the 24-foot tall sculpture of the king of the monsters, along with fan art and a graffiti wall where visitors can memorialize their favorite Godzilla moments. Giveaways and photo opportunities will also be available.

From 6:00 to 7 p.m. on Thursday, July 24th, WBHE hosts Batman ’66, reuniting pop icons Adam West, Burt Ward and Julie Newmar on the Hall H stage for “Batman: The Complete Television Series.” Moderated by Ralph Garman, the actors behind Batman, Robin and Catwoman will give the audience an inside look at the exclusive content contained in the Home Entertainment release due out later this year, as well as present dazzling high-definition re-mastered footage from the landmark series.

On Friday, July 25th, from 7:00 to 9:00 p.m., it’s the world premiere of “Batman: Assault on Arkham,” the next entry in the ongoing series of DC Universe Original Movies, due out on Digital HD on July 29th and as a Blu-rayTM Combo Pack on August 12th. Produced by WBHE, DC Entertainment and Warner Bros. Animation, the full-length animated film is based on the best-selling “Batman: Arkham” videogame series. Lucky attendees at the Ballroom 20 event will also be treated to a panel discussion featuring Kevin Conroy of “Batman: The Animated Series,” Matthew Gray Gubler, Troy Baker and John DiMaggio, and the filmmaking team of producer James Tucker, director Jay Oliva, dialogue director Andrea Romano, screenwriter Heath Corson, and moderator Victor Lucas. There will also be special announcements, exclusive prizes and a few potential surprises.

The final day of the Con, Sunday, July 27th—Kids’ Day—will see WBHE’s world premiere of the family animated film “Scooby-Doo! Frankencreepy” at 10:00 a.m. in Room 6BCF. The story follows everyone’s favorite Great Dane and the Mystery Inc. gang on a trip to a cursed castle inhabited by a terrifying ghost. Attendees can stay for a panel discussion among several of the voice actors, including Mindy Cohn and Grey Griffin, director/producer Paul McEvoy and screenwriter Jim Krieg. The feature will be available August 5th on Digital HD, and on Blu-rayTM Combo Pack and DVD on August 19th.

On the same day in Room 6A, at 2:15 p.m., animation fans can also watch the world premiere of the beloved cat-and-mouse duo Tom and Jerry in “Tom and Jerry: The Lost Dragon,” an hour-long feature filled with song, sorcery and slapstick. Filmmakers Spike Brandt and Tony Cervone will be on hand to present the film, which will be released on Digital HD on August 19th, and on DVD on September 2nd.

And fans of the extensive WBHE library will be able to enjoy panels discussing some of their newest and greatest classic offerings: on Saturday the 26th at 1:00 p.m., Warner Archive Collection presents Trailers From Hell Live! A match made in classic movie heaven, the gurus of TFH, paired with the fan-centric trio of WAC podcasters, make a detailed, often humorous dissection of trailers from some of the great films in the fanboy spectrum. From sci-fi and horror to action and noir, it’s an education on current and upcoming releases in the WAC catalog and Warner Archive Instant, from a panel that includes Josh Olson and WAC Podcast hosts George Feltenstein, Matthew Patterson and DW Ferranti. In Room 25ABC.

At 12:00 p.m. on Sunday, WAC presents A Batman for all Seasons. Join respected producer/author Michael Uslan, producer James Tucker, producer/director Brandon Vietti, WAC Podcast hosts Patterson and Ferranti and surprise guests, as they examine Batman iterations and oddities throughout history, from early films like “Public Defender” and the Batman cartoons, to new versions of the character, the off-kilter takes and new media. Attendees who stick around to the end will be privy to a special WAC announcement that will excite fans both “Young” and old. Room 7AB.

An exciting lineup, but of course what would make Comic-Con a MILLION times better would be a Batman v Superman reveal. We leave you with Variety's tweet for thought. Make it happen Zack Snyder!

No mention by WB of taking Batman v. Superman, but wouldn't be surprised if Zack Snyder shows up with something. He loves Comic-Con.
— Marc Graser (@marcgraser) July 8, 2014