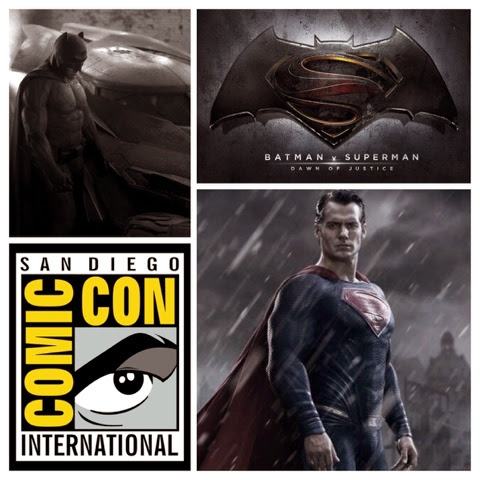 We're headed to San Diego, where there will be plenty to see of you're a 'Batman v Superman' fan. And we don't just mean the surprise Warner Brothers is potentially planning for us at Saturday's panel, although that is what EVERYONE is talking about:

Warner Bros. dropped the Batman v. Superman bomb last year at the Con, and the studio does enjoy upstaging itself. Our guess, Dwayne Johnson announces the Shazam/Captain Marvel role he’s been teasing out in the media. In addition to the Justice League, Warner’s has access to the entire DC Comics library, and with Marvel’s show of force and box office domination, now would be the time to get fans pumped. It’s a safe bet we’ll also get a tease from Zack Snyder’s aforementioned superhero showdown during the WB presentation.

Warner Bros. vs. Marvel: The two powerhouses will vie for the "Who Won Saturday?" crown. Warners is bringing Mad Max and The Hobbit, and will likely tease Batman v Superman: Dawn of Justice. Marvel is expected to deliver Avengers and Ant-Man surprises. (10 a.m. for Warners; 5:30 p.m. for Marvel; both in Hall H)

Even Fandango, emailed us to let us know about a little poll they did previewing what fans were most excited about seeing at Comic-Con. Batman v Superman was front and center, despite the fact that the studio has not officially announced any presence by the film there this year:

Fandango surveyed more than a thousand moviegoers on the most anticipated movies at this year’s convention. Avengers: Age of Ultron is the Con’s Most Anticipated, with Batman v. Superman right behind it.

The Wall Street Journal has pointed out that the studio "isn't ready yet to start hyping its next DC Comics movie, "Batman vs. Superman: Dawn of Justice." So we wait..

Some have suggested "Batman V Superman" won't be at SDCC, but it would be a huge missed opportunity if Warner Bros. doesn't reveal something when Disney may come out firing on all cylinders.

Plus, it's Batman's 75th anniversary, so what better way to celebrate than with a look at Batman's new suit? Sure, we had a tease of it back in May, but there were rumors we were supposed to have the big reveal soon. Otherwise, we'll settle for even the briefest of teaser trailers or concept art during Warner Bros.' panel Saturday.

We'll settle for ANYTHING. In the meantime, check out everything that Warner Brothers is officially bringing to Comic-Con, and follow us for the latest updates on Twitter, Facebook and Instagram.
Posted by Blog Administrator