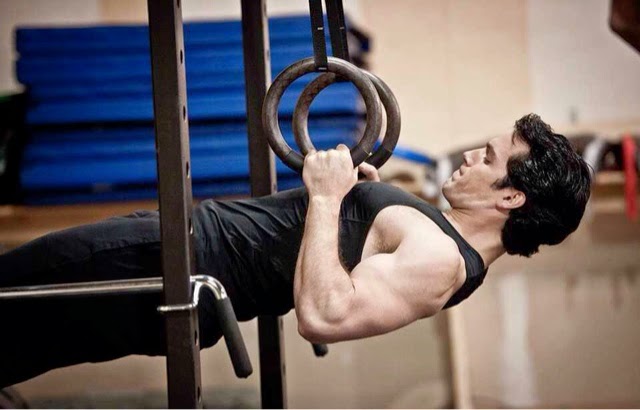 Henry Cavill is a force to be reckoned with and you are right behind him. We have passed the £800 mark, as we help Henry reach his fundraising target ahead of his participation in the Gibraltar Rock Run. A huge thanks to all the sites and fans who have been spreading the word about the run, that will benefit The Royal Marines Charitable Trust Fund. We're really hoping everyone pitches in so we can reach Henry's £20,000 goal. This is his official fundraising page, and you can even leave him a message of support. We will come through for him, but we need your help. Go #TeamHenryCavill.

Filming on Batman v Superman continues in Detroit, and this past week we got a first look at Amy Adams on set. We also heard from Batman himself, who talked to Entertainment Weekly about the outcry over his casting, and a little bit of what we can expect on the big screen:

BEN AFFLECK: I’m right in the middle of shooting now. It’s a process that I’ll probably have better perspective on when I’m done. I can tell you that every time I do a role, it’s the responsibility of an actor to get their physical self as close to the role as possible. And Batman’s obviously got a set of expectations that are tough. So I spent a lot of time working out. And it’s a far cry from Gone Girl where my character is described as “puffy and hungover.” I want you to know I worked equally hard at both! [laughs]

It feels slightly ridiculous using the word “outcry” describing your casting. But there was actual outcry—a lot of people freaked when they heard about Batfleck. To what extent did all that get under your skin?

Before I took the role, Warner Bros. gave me a bunch of past reactions to casting and said, “Are you sure you want to get into this? This is part and parcel of these movies now. There’s a lot of active fans with a lot of opinions.” To me, having been through a certain amount of that, it doesn’t really… Everyone’s entitled to their opinion. I wouldn’t have taken the part if I didn’t trust my instincts in terms of the filmmaking. I think Chris Terrio wrote a terrific script. Zack’s a great visual director. And there’s an interesting take. I wouldn’t have done it if I didn’t think I could do it. I have the benefit of a lot of that understanding. But also, everyone is entitled to their opinion. That’s a big part of this international sport. The Fifty Shades of Grey kid or whatever it is. That’s sort of become a thing.

Read the rest at EW.

This tweet from The Hollywood Reporter definitely caught our attention.

Tom Hiddleston has the offer for MGM's BEN-HUR. Another actor who was in the mix was Henry Cavill.
— Borys Kit (@Borys_Kit) August 13, 2014


With the just announced superhero slate, you'd think Superman would be pretty busy for the next few years. But what if.. you can learn more about the project at Deadline. Even if Henry is not Ben-Hur, it's great to see he's being considered for those types of projects.. his years of hard work and perseverance paying off!

Back to Batman v Superman, if you haven't caught the closest thing we've seen to the teaser shown at Comic-Con you have to watch this clip. The video is very similar to the real thing, right down to the soundtrack... except for the ending. Enjoy!

We can always turn to you guys to provide fun and fresh content, and Armand didn't disappoint. He posted this funny sign on Instagram, after spotting it at his local bookstore. 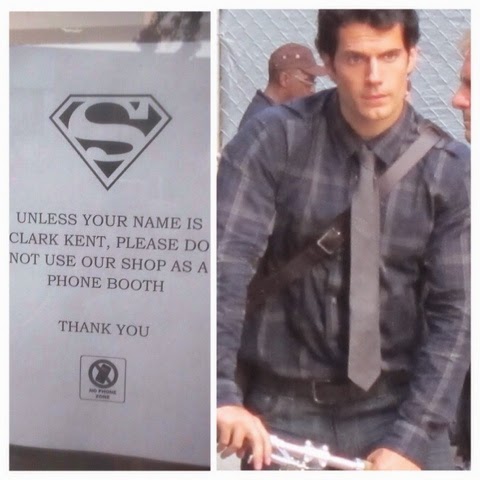 Look for updates from Detroit as we get them!
Posted by Blog Administrator