Could Henry Voice Supes In A DC Animated Film?.. Maybe!

As we wait for Henry to once again own the big screen in that majestic red cape of his, there's some rather surprising news we thought we'd have some fun with. Collider had a chance to talk to the filmmakers in charge of shaping the DC animated titles, and Henry's name came up!

Of course our minds immediately went to these images, coupled with Henry's voice reel..

But then we read the rest of what Jay Oliva had to say:

“When I worked on Batman v. Superman, I asked Henry Cavill about playing Superman in one of our movies, (..) I asked him about a potential Red Son and he got really excited.” 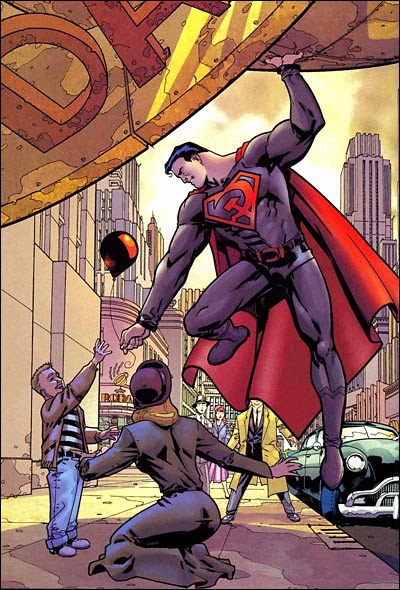 Okay, so it's not gonna be all flowers and cute dinner dates between Lois and Clark. At least not in the U.S. -- If you're not familiar with Red Son, here's a quick roundup.

Author Mark Millar created the comic with the premise "what if Superman had been raised in the Soviet Union?" It received critical acclaim and was nominated for the 2004 Eisner Award for best limited series.

Henry also told Entertainment Weekly, that Red Son was one of the comics that inspired his Man of Steel performance:

“I read as much as I could, purely because I wanted to get a great reservoir of knowledge from the source material. There are so many different representations of the character that it was easy to draw a baseline and pick and choose some flavors. They’re all facets and aspects of the same character, so you’ve just got to combine them and can play around with them and apply it to the script.”

But let's not get ahead of ourselves, Oliva was quick to point out the difficulties of getting Henry to voice an animated film:

“We only have a window of about three weeks to work with our voice actors, and if you’re an actor in demand, that can be really tough.

So that leaves us back where we started.. waiting for the Batman v Superman trailer to hit next month, with a little help from the talented @HenryCavillToon.

UPDATE 4/12: Jay Oliva is keeping the flame of hope ALIVE!!!

@huntris1371 @HenryCavillNews @DCComics if he ever wanted to be in one of my animated films he is always welcome!
— Jay Oliva (@jayoliva1) April 12, 2015


Okay, Henry.. you heard the man. IT'S ALL. ON. YOU.
Posted by Blog Administrator