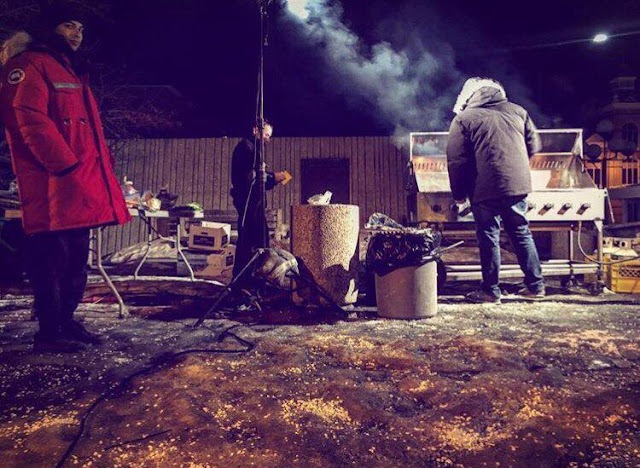 Shooting a film many times means working overnight hours, sometimes under very tough conditions as Henry showed us last week. So it's nice to see that the Nomis cast and crew are getting treated to some good food! Alexandra Daddario shared this pic from the set early this morning. An excited crew member also shared his photo with Nathan Fillion.


In their spare time, Henry and Nate have been hitting the gym, and this regular (who we mentioned in our last wrap) wasn't impressed.


Since they announced on the radio that Nathan Fillion and Henry Cavill are working out at my gym, it's been hard to l find a locker to use 😡
— Lyndsey Wallis (@lyndseywallis) March 11, 2017


Nate had this funny response for her.


Of course that's probably going to lead to even more people showing up at the gym. Just a few more weeks before they wrap, Lindsey!

Minka Kelly has not been spotted on set yet, but she's probably on her way after bidding goodbye to Paris on Monday.


We are excited to find out who she's playing in the film, and hopefully she shares updates on her social media.

Mpho Koaho posted his sharp look for his latest scenes this week.


Stay tuned for updates from Winnipeg as we get them.