Are you ready Paris, here we go!

Le Parisien has revealed new alleged details, on the Mission: Impossible 6 filming taking place in and around the 15th arrondissement (district) this weekend.

According to the paper, starting tomorrow the area around Garibaldi Boulevard will be closed to traffic ahead of a two day shoot Sunday and Monday. Parking will also be banned.

Two helicopters will reportedly fly over Paris this Friday and Saturday, taking aerial shots in the Bercy neighborhood and along the Seine.


Filming is expected to last until Monday afternoon, so keep your eyes open if you're there!

Tom Cruise has been spotted in Paris, along with director Chris McQuarrie. We don't know when Henry will be on set, but we'll keep you updated throughout filming.

UPDATE: Our contributor Rebecca translated Le Parisien's article for you:

In anticipation of two days of Paris filming of the next "Mission Impossible" production 6 of the American blockbuster, a large part of the boulevard Garibaldi neighbourhood will be prohibited to all traffic and parking, well before they film on Sunday. The shooting is expected to last until Monday in the early afternoon, and the prohibition will neutralise the neighbourhood from 8am this Friday until 2pm Monday.


Moreover, for the needs of the film, two helicopters will be made to fly over the capital, this Friday and Saturday. They should take aerial shots of the Bercy neighbourhood and along the Seine.


tournage mission impossible lol for my girl @fairoubz #tomcruise#missionimpossible#abatlascientologie#scientologyisbullshit#giveitawayTom#freedom#helicotere#copter#army#gendarmerie
A post shared by Frenzzzie (@frenzzzie) on Apr 7, 2017 at 12:35am PDT


For the fans, just take your binoculars and hope to see Tom Cruise, Henry Cavill, Vanessa Kirby or director Chris McQuarrie. The new adventures of Ethan Hunt (..) is due for release at the end of July 2018. Other scenes should be shot elsewhere other than on boulevard Garibaldi. So keep your eyes open. 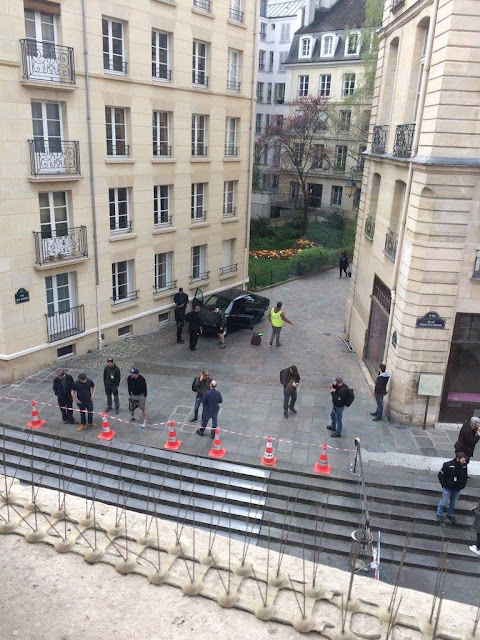 The AFP has released a statement from the Mayor of Paris, that welcomes the "significant economic benefits of the shoot" -- reportedly amounting to about 25 million euros.

According to the release, production will run in the capital for 35 (discontinuous) days, which will allow the hiring of more than 300 French technicians, substantial accommodation expenses for technical and artistic teams from the United States and England, and an increase in activity for tech service providers (equipment rental, special effects).

The Huffington Post reached out to the city for details on the shoot, and this is what they were told:

"We do not have the right to communicate on the premises involved in the shooting, but the neighbors in the neighborhoods are warned for the film's needs," said the City of Paris to the HuffPost before conceding: "The teams of the film are rather cautious about security issues. "

Mission Cinema, which manages filming in the capital, has contacted The HuffPost and given some details about this meticulous organization: "It is a film with many stunts, which involves intervention for example, the street management takes care of removing street furniture, such as poles, for the needs of the film, and the service that manages the green spaces of Paris is responsible for the protection of the gardens and lawns ".
Posted by Blog Administrator