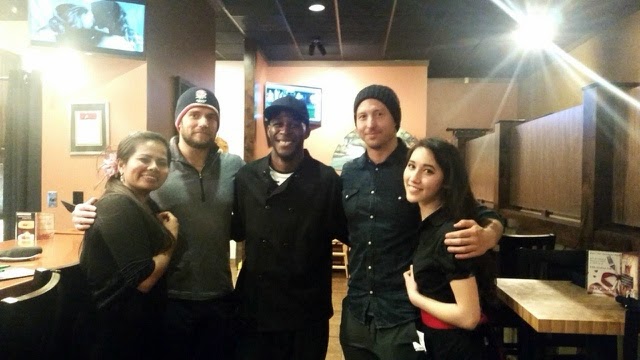 earthangel13 met Henry and his trainer, Mike Blevins in Utah recently, and shared her account with Amancanfly. It's nice to see these two together again! -- Read the story below.

So 2015 is turning out to be a VERY eventful year.
Yes. Yes, that is Henry Cavill, and he did walk into my restaurant Thai Siam, and, yes, I was the ultimate fangirl.
I was just minding my own business, watching the front, when two men walked into the restaurant. When I first saw Henry Cavill and first heard his beautiful English accent, I thought he was suspiciously good-looking and that he looked familiar, but I couldn’t place him.
SO, they sat down, and I took their order, all the meanwhile looking at them and wondering where I’d seen him before. I thought, “You know, he looks like Henry Cavill.” But, when I went back to the kitchen to tell Cameron and Deshawn that I thought Henry Cavill was sitting at the bar, we all agreed that it was highly unlikely.
I went back to talk to them, and I mentioned that I liked his accent, and he told me he liked mine, and where was I from? THEN I STARTED BLABBERING. And, for about fifteen minutes, he, his friend, and I just went on and on about Japan and what we loved about it, and we laughed and it was fantastic and he was adorable, but then he said that he wanted to order some wine.
THE GENIUS STRUCK ME.
"Sure! Could I see some ID please?"
I’ve never seen someone so reluctant to pull out his ID in my LIFE.
When I saw “Henry William Cavill,” I almost died.
"I’m trying really hard to be calm right now," I said really quietly as I held onto the ID card. "but I KNEW IT WAS YOU."
He just laughed and rubbed his beard. “You mean my disguise didn’t work?”
I didn’t want to attack him while all the customers were around, because I didn’t want him to be mobbed by all the other people who thought he was beautiful, too. So, I patiently waited till everyone left, then I, Deshawn, Cameron, and all the server girls swarmed in for photos.
He was so nice. Really. I just can’t believe he came to Thai Siam. IT WAS SO SURREAL. I never imagined it would happen, holy FLUFF.
IT WAS A GOOD NIGHT.

Henry has been in Utah since the end of last year training for his role in Stratton, that is set to begin filming in a few months. Thanks for sharing everyone.