We also heard from Guy Nardulli who was, you know.. THE guy. He tweeted:

@ZackSnyder and henry cavill were amazing to work with on this spot. thanks guys! Had a blast with everyone.

He later exclusively told us about working with Henry:

The ad is by far the best spot we've seen tied to the Man of Steel promotion, and we thank Guy for sharing his experience with us.

via Henry Cavill & the Cavillry 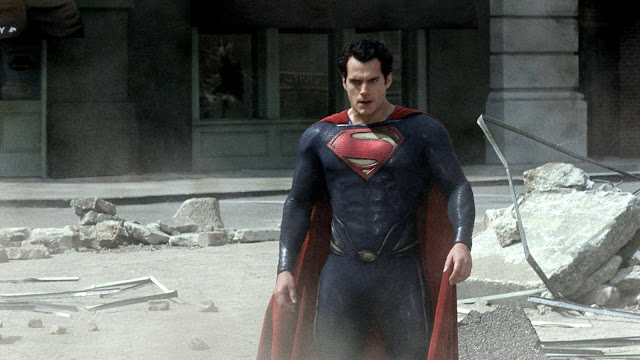 
Today Carl's Jr. and Hardee's revealed more information about their Man of Steel ad campaign, and they shared these great new stills as well (you can see Supes in the back in the second one. Not so sure it's Henry). By the way, Zack Snyder directed the Man of Steel commercial that will be released next week! 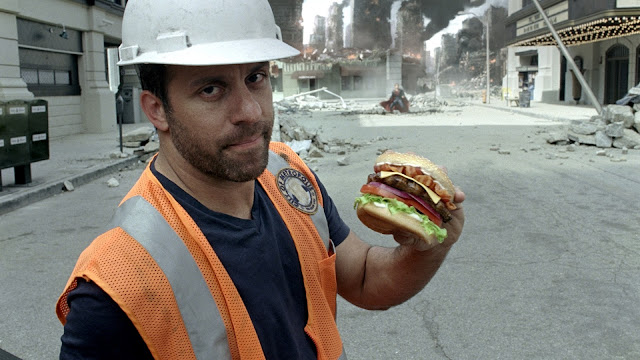 Carl’s Jr.® and Hardee’s® present a super burger for super fans. Boasting six slices of bacon, the new Super Bacon Cheeseburger is available now at all Hardee’s restaurants and debuts tomorrow at Carl’s Jr. locations. The newest premium burger offering from Carl’s Jr. and Hardee’s is part of the restaurants’ promotional tie-in with Warner Bros. Pictures’ release of “Man of Steel,”TM in theaters June 14.


The Super Bacon Cheeseburger features a charbroiled beef patty, American cheese, mayonnaise, tomato, onion, lettuce and a super serving of bacon, with six full bacon strips woven together into a crispy bacon nest. Prices start at $3.99 and may vary by location.

“We knew ‘Man of Steel’ was going to be the must-see film this summer, so it was the perfect partnership for our must-eat burger this summer, the Super Bacon Cheeseburger,” said Brad Haley, chief marketing officer for Carl’s Jr. and Hardee’s. “With melting American cheese and six interlocking strips of bacon – three times the amount found on other bacon burgers – it truly earned the name ‘Super.’ And we were excited to be able to have the Man of Steel himself, Henry Cavill, featured in our ad and to have it directed by the talented Zack Snyder, who directed the film. It will be an epic movie and an epic ad for an epic burger.”

The Super Bacon Cheeseburger will be promoted through a “Man of Steel”-themed commercial created by Los Angeles- and Amsterdam-based creative agency 72andSunny. The TV commercial highlights the unsung, everyday heroes in Superman’s world: these “supermen” deserve a super-satisfying burger. The spot can be viewed on the Carl’s Jr. and Hardee’s YouTube channels (www.youtube.com/carlsjr and www.youtube.com/hardees) and will begin airing on television on May 27.

Carl’s Jr. and Hardee’s will be offering guests a series of four 40-ounce collectors’ cups for purchase featuring the Superman emblem and characters from the film, including the Man of Steel, Jor-El and General Zod.

“Man of Steel”-themed premiums will also be offered as part of any Cool Kids Combo at Carl’s Jr. and participating Hardee’s.

CKE Restaurants Holdings, Inc. is a privately held company headquartered in Carpinteria, Calif. As of the end of fiscal 2013, the company, through its subsidiaries, had a total of 3,318 franchised or company-operated restaurants in 42 states and 28 foreign countries and U.S. territories worldwide, including 1,369 Carl’s Jr.® restaurants and 1,944 Hardee’s® restaurants. For more information about CKE Restaurants Holdings, please visit www.ckr.com or its brand sites at www.carlsjr.com and www.hardees.com.

About “Man of Steel”

From Warner Bros. Pictures and Legendary Pictures comes “Man of Steel,” starring Henry Cavill in the role of Clark Kent/Superman, under the direction of Zack Snyder. A young boy learns that he has extraordinary powers and is not of this Earth. As a young man, he journeys to discover where he came from and what he was sent here to do. But the hero in him must emerge if he is to save the world from annihilation and become the symbol of hope for all mankind.

“Man of Steel” also stars Amy Adams, Michael Shannon, Kevin Costner, Diane Lane, Laurence Fishburne, Antje Traue, Ayelet Zurer, Christopher Meloni and Russell Crowe. The film is produced by Charles Roven, Christopher Nolan, Emma Thomas and Deborah Snyder. The screenplay was written by David S. Goyer from a story by Goyer & Nolan, based upon Superman characters created by Jerry Siegel & Joe Shuster and published by DC Entertainment. Thomas Tull, Lloyd Phillips and Jon Peters serve as executive producers. Warner Bros. Pictures presents, in association with Legendary Pictures, a Syncopy Production, a Zack Snyder Film, “Man of Steel.” Opening nationwide on June 14, 2013, the film will be released in 3D and 2D in select theaters and IMAX, and will be distributed worldwide by Warner Bros. Pictures, a Warner Bros. Entertainment Company. “Man of Steel” has been rated PG-13 for intense sequences of sci-fi violence, action and destruction, and for some language. www.manofsteel.com
Posted by Blog Administrator