UPDATE 5/2: Full interview is in. READ IT NOW.  If you haven't seen the HOT PICTURES you're in for a treat (all we have to say is, Gina Carano is ONE. LUCKY. WOMAN.) 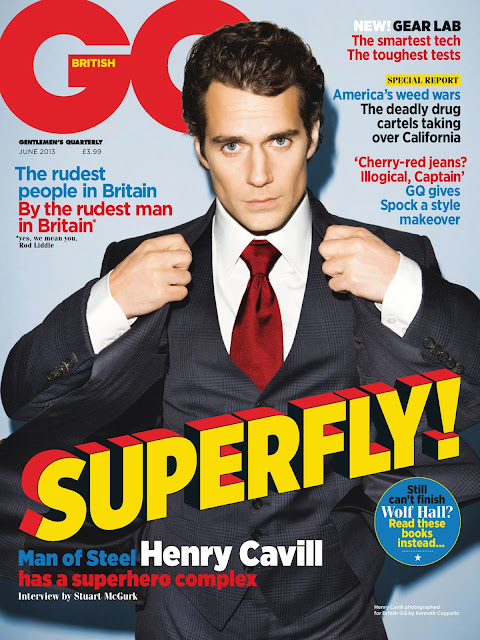 UPDATE 4/30: IGN has the best preview of Henry's interview:

In the article, Cavill also describes his love of video games. “I’ve been playing a lot of single player games, like Skyrim,” he reveals. “Goodness, that’s a great game. “

Indeed, his love of games is so great that when director Zack Snyder called to offer him the Man of Steel role, he nearly missed out due to playing World of Warcraft. “I saw it was him [calling] but the thing is, you can’t save World of Warcraft, you can’t pause it. It’s live.”

But mercifully Cavill called him back and gratefully accepted the part. As for another role – that of James Bond – the actor narrowly missed out to Daniel Craig a few years back, and wouldn’t be adverse to playing 007 in the future…

“If I’m in the running again, [if] people don’t just see me as Superman, and they could see me as Bond, then yeah, I’d love to do it.”

UPDATE 4/29: The Daily Mail has more new Henry quotes from the interview. He talks about the awesome Russell Crowe, and the gifts and advice he gave him when they first met years ago.

UPDATE 4/28: Metro has published a preview of Henry's interview with GQ magazine. He talks about his audition while wearing the Superman suit (and how he felt at the time).

‘It was totally embarrassing,’ he told GQ magazine. ‘I wasn’t in training. I wasn’t feeling fit or looking good, and you put on a Lycra suit and it does not help it. I just thought, OK, I’m not getting this job. I’m fat Superman. It’ll be some really in-shape dude that when they step out they look amazing.’

Read the rest over at Metro's site.

The magazine goes on sale Thursday!

We'll share the official link of Henry's GQ cover and the rest of the interview when/if they are released.