Latest From The Fortress Of Solitude, Err.. A Snowy Detroit

With a new picture of Henry at that Crossfit event popping up online over the weekend, we figured it was time for a beanie appreciation post! - that, plus the fact that more snow is on the way to Detroit today. 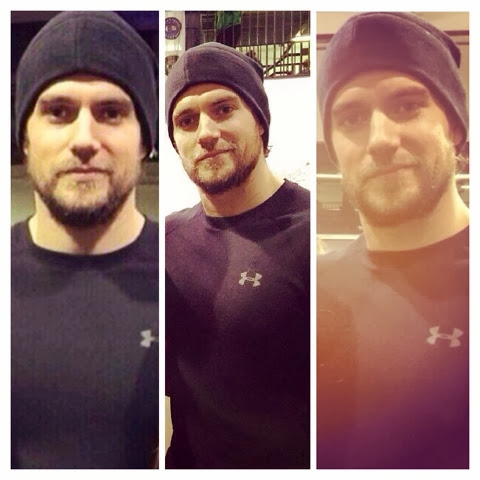 So exactly how much snow has Henry been dealing with since he arrived to prepare for Man of Steel 2 last month? -- let's put it this way, the Detroit Free Press says as of last week, it's been the seventh snowiest winter in that city's history. The season's total was at 67.9 inches, and again another snowstorm is now moving in. So yeah, Henry's own Fortress of Solitude... stay warm Superman!

We didn't hear of any sightings this weekend (booh!), but that doesn't mean people are not aware that the Man of Steel is in town..

While we don't encourage organized stalking, we would love to hear if you run into Henry like the lucky crowd at the Michigan Barbell competition. You saw the pictures, but even the owner of Motor City Crossfit where the event took place, was taken by surprise by Henry's popularity:

So you guys probably saw my post (..) about Superman (Henry Cavill) dropping in to our gym for a competition (..) This guy is kind of a BFD apparently because his visit went sort of viral. Typically our most viewed posts on our FB page reach roughly 3000 people. Well his picture with one of our members has garnered almost 70,000 (..).


BFD?.. really??.. HE'S SUPERMAN! -- but we'll let it slide, because he did mention us in his post (thank you Jason). He went on to say this about meeting Henry:

I guess he was a pretty cool guy as well...so...go see his next movie since he's not a dick.

And if THAT'S not an endorsement, we don't know what is: #Superman  #Notadick ;)

Stay tuned for the latest from a snowy Detroit!
Posted by Blog Administrator