It's the news we've been waiting for!

Warner Brothers has finally set a U.S. release date for The Man from U.N.C.L.E. -- Start the countdown to January 16, 2015. The Martin Luther King holiday weekend date is a bit surprising like Collider points out:

Is this a lack of confidence or simply an attempt to open a more high profile film in the dumping ground of January? It’s unclear at the moment, but Paramount’s gamble with Jack Ryan: Shadow Recruit didn’t exactly pan out earlier this year.

Question is, will it fare better, worse or the same at the box office as this year’s Jack Ryan: Shadow Recruit – another reboot based on an older espionage genre property, which has taken in $123 million worldwide thus far (on a $60 million budget). It’s possible that Man from U.N.C.L.E. will do better in the U.S. since it retains the original show’s 1960s backdrop; comparatively, the Jack Ryan reboot’s modernized take on the Tom Clancy character’s origins struggled to stand apart as something unique, contributing to it becoming the lowest-grossing Ryan flick here in the States.

And then we get to JoBlo who we agree with (on the comedy bit):

I would expect THE MAN FROM U.N.C.L.E. to share the same comedic sense as Ritchie's SHERLOCK HOLMES films, but I wouldn't be shocked if it was a straight dramatic film either. The two young stars of the film should play well off of one another. This definitely has franchise potential.

Ahhh franchise, could we really take that much Solo? (yes, yes we could). The Playlist makes a case for the film, but worries about its competition (yup).

And while the star power behind "The Man From U.N.C.L.E." might not be as huge as the monster flick, Henry Cavill, Armie Hammer, Hugh Grant, Alicia Vikander, Elizabeth Debicki and Luca Calvani are no slouches and neither is director Guy Ritchie. So why is WB releasing this big screen reboot of the '60s TV spy series on January 16, 2015? Probably because their calendar is insane at the moment, with this summer and fall already full booked with an array of blockbusters and big movies. So fine, run with January, but did you really have to put it on the same weekend as the Daniel Radcliffe starring "Frankenstein" and Universal's Michael Mann cyber thriller?

Typical commentary on studio release dates would see this as a vote of no confidence. January is typically considered the dumping ground for dreck, a period when cinema-going has all but slowed to a halt.

That may, however, be a reductivist point of view, especially when Warner Bros. are trying to fit the film into a very, very crowded year.


Or maybe The Man From UNCLE is a complete carbuncle and WB just ‘fessed up by flushing it into a horrible u-bend of a release date. People are going to believe what they want, anyway. I’m not going to start a fight, but to me, Guy Ritchie’s name on the poster is far more an indicator of relative quality than a release date would ever be.

This is what Ain't it Cool News had to say, and Empire shares the silver lining:

That window means it's currently opening against Michael Mann's Cyber (which may not actually be called Cyber at all); the Paul McGuigan / Max Landis Frankenstein; and Kevin Hart comedy The Wedding Ringer. Don't be fooled into thinking that January is the film dumping ground it used to be either. The Martin Luther King Day holiday weekend, while it doesn't rake in summer money, has become an important date on the calendar, and this year provided reasons to celebrate for Ride Along, Lone Survivor and The Nut Job. But it can also be a risk, as the team behind Jack Ryan: Shadow Recruit can testify.

We Got This Covered brings the funny, while providing some perspective:

You see what you’ve done, Hollywood? With the summer of 2015 completely congested with tentpoles from all the major studios, Warner Bros. has opted to release two buzzy, star-studded projects in the cold winter months of next year. Spy reboot The Man From U.N.C.L.E. has been handed a January 16 release date, while con-artist caper Focus will be released on February 27.

If this was any other year we were talking about, I’d say that Warner Bros. had recognized the two flicks as likely bombs and decided to bury them in the typically barren months of January and February. However, 2015 is absolutely waterlogged with major flicks. In the summer of next year, Warner Bros. already has three major projects – sci-fi revamp Mad Max: Fury Road, Dwayne Johnson action adventure San Andreas and Joe Wright’s Peter Pan reworking Pan – but the months of May, June, July and August will also see the release of competing blockbusters like Avengers: Age of Ultron, Jurassic World, Fantastic Four, Terminator: Genesis, Ant-Man, Bourne 5 and (I hate to say it) The Smurfs 3.

So, perhaps an earlier release will bode well for both flicks. However, even their current slots won’t be completely without competition. The Man from U.N.C.L.E. will go up against a Frankenstein remake and Michael Mann’s thriller Cyber, while Focus will be battling Tarsem Singh’s sci-fi thriller Selfless and the star-studded 3D adventure Everest. Regardless, Warner Bros.’s releases will now almost certainly be the box office victors in their respective weeks, which likely would not have been the case if either flick had been released in the summer of 2015.

Also check out HMSS Weblog's take on the release date and the cool fact attached to it (hint: 007). 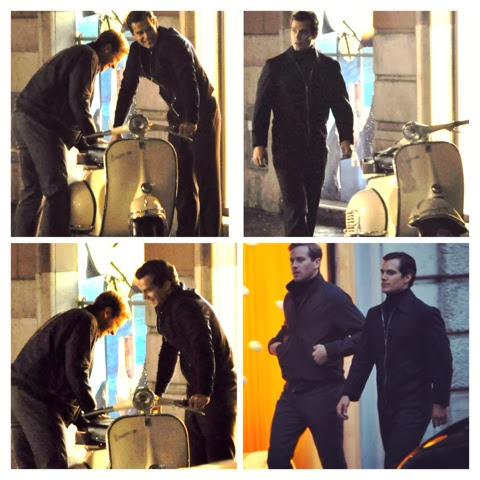 As for us, we remain confident director Guy Ritchie will deliver a fun action film, based on the popular 1960s TV series. Another thing we know for sure, is that Henry will be an awesome Napoleon Solo. We brought you extensive coverage during filming and can't wait for promo to begin. Trailer, trailer, trailer!
Posted by Blog Administrator

Email ThisBlogThis!Share to TwitterShare to FacebookShare to Pinterest
Labels: All About Henry, Fan Support, News, Post-Production, Solo Time, The Man from U.N.C.L.E