Best Surprises Of 2014: End Of The Year Roundup

The start of a new year is always an exciting time at Henry Cavill News, because as much as we look forward to what we know is coming (Stratton filming, The Man From U.N.C.L.E. release, Batman v Superman promo) it's those unexpected announcements that leave us feeling like we just hit the jackpot, every time!

As we wrap up 2014, you've been very vocal about who should win Fan Pic of the Year. Now we want to know what was your favorite Surprise Announcement of the Year. Let us know in the comments section below, or reach out on our social media accounts. We'll include your picks in our year-end review. Here are the finalists.

It was a quiet Monday morning in late May, when the RMCTF tweeted the news that had us cheering for Henry. Not only did they announce he was their new ambassador, they also shared the video where he took on that role for the first time, launching the last leg of the Royal Marines 1664 Challenge. In July they gave us a first look at Henry as Clark, as he supported the charity from the set of Batman v Superman, and a month later we got to break the news that he was participating in the Gibraltar Rock Run (and what an amazing event that was). We can't wait to find out what 2015 will bring!

2) Henry and his 'Batman v Superman' costars surprise the crowd at Comic-Con.


Okay, this wasn't reaaaally a surprise, since "Super Jedi" was a big clue that something was brewing. But the crowd in Hall H still went wild, as Ben, Henry, and Gal took the stage for the first time together -- and we got that teaser that fans are still talking about. The countdown is on for July, 2015.

Just when we thought the summer couldn't get any better, we found out Henry was throwing his support behind his hometown charity.. and it involved a cuddly family of gorillas! -- and bats, and tortoises, and some *clearly* starstruck lemurs. The best part? cavillconservation.com is just getting started!

One chilly Superman, all for charity, and we still can't stop watching.

5) Henry launches production company, and his next role is revealed.

Holy moly, this man just doesn't stop. After going straight from filming on The Man from U.N.C.L.E. to preparing and then filming Batman v Superman, in November we found out he's also taking on producing duties for his next film, Stratton. The movie is based on the books by Duncan Falconer, in which he'll play the action hero who's an operative of the SBS. Filming is set to begin in the spring, and Henry is already preparing for that role (and we're guessing the new 'do will stick around for that).

So there you have it, the five huge surprises we think made this year SUPER special for Henry's fans. Let us know which one was your favorite, as we look forward to whatever 2015 has in store for us. Go Henry! 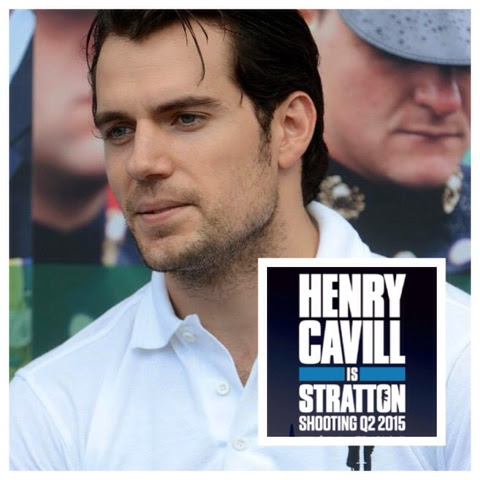 Email ThisBlogThis!Share to TwitterShare to FacebookShare to Pinterest
Labels: All About Henry, Best of 2014, Fan Support