CNN: Henry talks about his family, Comic-Con, his future in the Man of Steel sequels.

MTV: Henry talks about the pressure on taking on the role of Superman. Watch on their site or below.

MORE GREAT INTERVIEWS UNDER THE CUT


Sunrise - Australia (Thanks Gabi!) - Henry says we can all have a body like his..


E! Online: Henry admits to being terrible at something (hard to believe) & Amy continues being her adorable self when talking about him. Plus Henry checks out his action figure. CLICK TO WATCH or watch below.


IGN: Henry talks about how he would like the superhero world to progress next on film.

Toronto City News: Henry talks about his suit, and Amy's first reaction when she saw him in it. Plus she goes into specifics about him holding her up during the flying scenes. It's a must watch! - at their site, on YouTube or below.


Comicbookmovie.com: Henry reveals Superman's age. We've seen some of this interview on others sites. But there are some new quotes. And they are pretty great, especially at the end (at about 7:20).


eTALK  (Canada): Henry smiles big when the reporter tells him he's about to become a superstar. Plus Amy & more of her cuteness about Henry. CLICK TO WATCH.

WGN: Henry talks filming Man of Steel in Illinois. Click pic to watch. (Thanks Susan for the links). 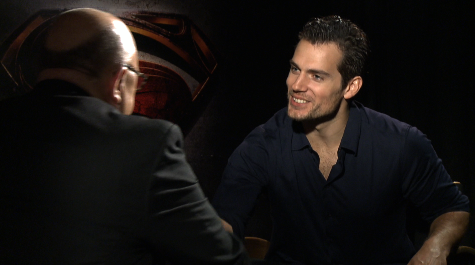 Fox Chicago: Henry talks about filming in Illinois and more. Watch at their site or below.


Fox Denver - Henry's funny clip starts at about 3:40. Watch at their site // YouTube or below.

And don't miss ALL THE OTHER GREAT INTERVIEWS from the Man of Steel press junket!
Posted by Blog Administrator