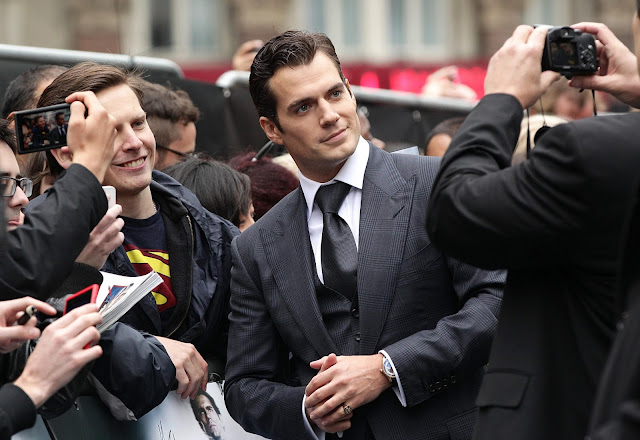 Henry with fans at the London premiere of Man of Steel


Add EXTRA host Maria Menounos, to the growing list of supporters who think Henry would be perfect for the role of Christian Grey. While we completely agree, we can pretty much tell you it's not happening.

Sure, Henry spoke about his interest in reading the Fifty Shades of Grey script in these interviews during the Man of Steel promo tour, and here's a new quote from a Spanish interview we just translated for you:

What can you tell us about the rumors that link you to the Fifty Shades of Grey project?

One thing is a book and it could be the most marvelous book in the world, and another thing is to talk with the director and see a script. I still haven't seen a script, or talked to any director, and of course things could change a lot from a book. If they gave me a script to read and I spoke to a director then I'd think about it.

Despite the buzz, even his publicist admitted to Hollyscoop they haven't been approached for the role. (2:30) love the commentary btw..

But really the main reason we know Henry is not in the running, is the fact that his next project The Man from U.N.C.L.E. starts filming in September (Yay!). With Fifty Shades of Grey filming in the fall, you see the scheduling glitch EVEN if all parties were interested. While we would have loved to see Henry play Christian Grey, we're really excited to watch him become American spy Napoleon Solo in The Man from U.N.C.L.E. - his costar Armie Hammer revealed we may even get the funny side of Henry. We can't wait!

Email ThisBlogThis!Share to TwitterShare to FacebookShare to Pinterest
Labels: All About Henry, Buzz, Fan Support, The Fifty Connection