Okay, we know we said all we were probably gonna get from the New Mexico set of Batman v Superman were pics like these..


But we're actually also getting some of these. Hiya buff Zack Snyder!


Now we're not complaining, since thanks to Henry we've gotten some really sweet fan pics out of there already. But... a set pic or two wouldn't hurt, especially since we hear a WRAP IS NEAR. Costume designer Michael Wilkinson reportedly shared specifics on the production schedule, while speaking in Austin Sunday:

Austin Film Society’s event came at the perfect time, as Wilkinson’s star is poised to shoot further and faster than ever before. Already 130 days into a 140 day shoot for the highly anticipated Batman v Superman, this event found Michael just after a two week shoot in Chicago and on his way to costuming 60 extras in New Mexico for one of the many scenes set in various international locations, in a film that includes over 10,000 extras, 250 speaking roles, and represents 18 months of design time. Not one for slowing down- after wrapping, Wilkinson will jump immediately into Joy, collaborating again with director David O. Russell.

So 10 days from last Sunday.. not counting the weekends and the upcoming holiday break.. sounds like a wrap around the first week of December. We're not gonna lie, already getting the filming update withdrawals, same as around this time last year when Henry wrapped The Man From U.N.C.L.E.  Hopefully the Stratton schedule holds, and we start bringing you those updates as filming gets going in early spring. Also, don't forget the rumor is we're getting a Batman v Superman trailer with the latest Hobbit film, which opens December 17. Please Santa Warner Bros., we've been REALLY good all year. 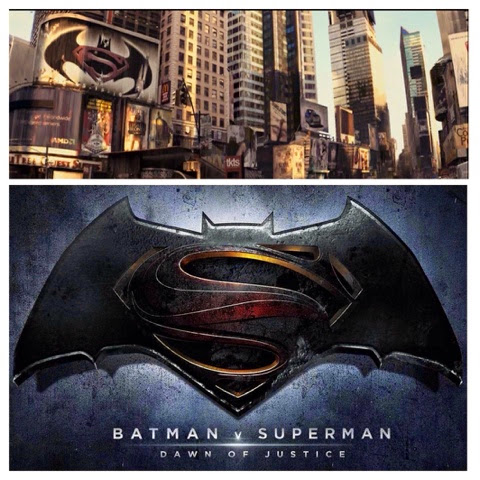 And here's a cool little update for those who like those Easter eggs. Director Francis Lawrence just shared some awesome details, about the much talked about Batman v Superman logo in 'I am Legend' -- that has now become the official one for the film. WATCH (at about 2:10).


Okay, that's about it for now. Hopefully more fan pics, and *cross your fingers* set pics from New Mexico, as Batman v Superman continues filming in the "Land of Enchantment."
Posted by Blog Administrator

Email ThisBlogThis!Share to TwitterShare to FacebookShare to Pinterest
Labels: Batman v Superman, Henry is THE man, In Production, New Mexico