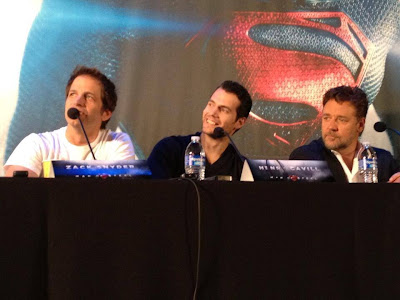 By now we hope you're caught up on all the new pics, videos, and tweets, that came out of the first day of the Man of Steel press junket in LA. Now to the interviews from the weekend.

Henry shared his thoughts on being part of a Justice League with Crave Online:

“Of course I’m open to it, very much open to it, but I have no idea what plans are for that,” Cavill said. “I’m not privy to that kind of information. I think it would be a lot of fun to explore the character further and a continuing journey, but I know nothing about those plans so far.”

Reports of a Justice League plan may be exaggerated. Certainly, news broke that Christopher Nolan and David S. Goyer were tapped to produce it, and then that was taken back. Cavill could only confirm that Justice League thoughts popped up on the Man of Steel set.

“You know what, there’s so much talk about it constantly,” Cavill said. “Everyone’s talking about if Justice League will happen. None of it has ever been official speak. It’s always been what if, and if we were to do, how would we do it? It’s always just been brainstorming and fun ideas as opposed to genuine thoughts. Certainly when it comes to me, because if there is genuine thought about it, it’s probable behind very locked doors.”

And while Henry may be more than ready to get going with a Justice League film, director Zack Snyder tells Collider it could be too soon:

Collider: If they did offer you Justice League, and they offered you a Supermansequel, which is the one that gets your attention?

Zack Snyder: Look … completely hypothetically, I feel like you need … to get Superman a little further down the road, I think, before you can do aJustice League movie.