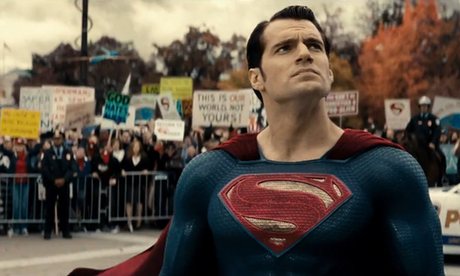 Surprise!.. Superman is not really dead. (In fact he's busy training for the role right now).

Henry showed up in a recorded message from the London set of Justice League, that was shown at CinemaCon this afternoon. It was part of the Warner Brothers presentation in Las Vegas, and his appearance had everyone talking..

Warner Bros is showing a future of DC sizzle reel, at the beginning focused on BvS, and then moving on to Suicide Squad. #cinemacon
— Peter Sciretta (@slashfilm) April 12, 2016

Cast of "Justice League" just said hello from the set. Henry Cavill is there. So, yeah, Superman is in "Justice League." Probably not dead.
— Darren Franich (@DarrenFranich) April 12, 2016

Ended with Zack Snyder and the cast of JL on set. Henry Cavill was there so I guess he's back pretty quickly.
— devin faraci (@devincf) April 12, 2016

Zack Snyder and #JusticeLeague cast sent a message from the set in London as they couldn't be here. It's happening, folks. #cinemacon2016
— JoBlo.com (@joblocom) April 12, 2016


That's right, Supes front and center all the way!


WB did also confirm that a solo Batman film is on the way, and showed new Wonder Woman footage. You can read more over at The Hollywood Reporter and on Deadline's live blog below.


P.S. Henry was at CinemaCon last year ahead of The Man from U.N.C.L.E. release, and it was an awesome day you may want to relive in our wrap.