And here we thought Michael Shannon had made a cameo in Batman v Superman. It turns out it was all Hollywood magic, as you can see in this video shared by the company in charge of making the Zod dummy (which might explain his reaction to the film). Hey, at least they did a great job with his likeness. Well, except with one part that apparently belonged to Ben. WATCH.

The Easter eggs and behind the scenes stories continue coming in via Collider's interview with director Zack Snyder and his wife, Deborah. Really cool stuff in there.

Empire Online's article on what they learned after talking to Zack, is also a must read.

Artist Vance Kovacs was in charge of creating some of the concept art for the film, and it's pretty amazing.

"The End of the Fight"

"Doomsday gets hit by a Nuke" 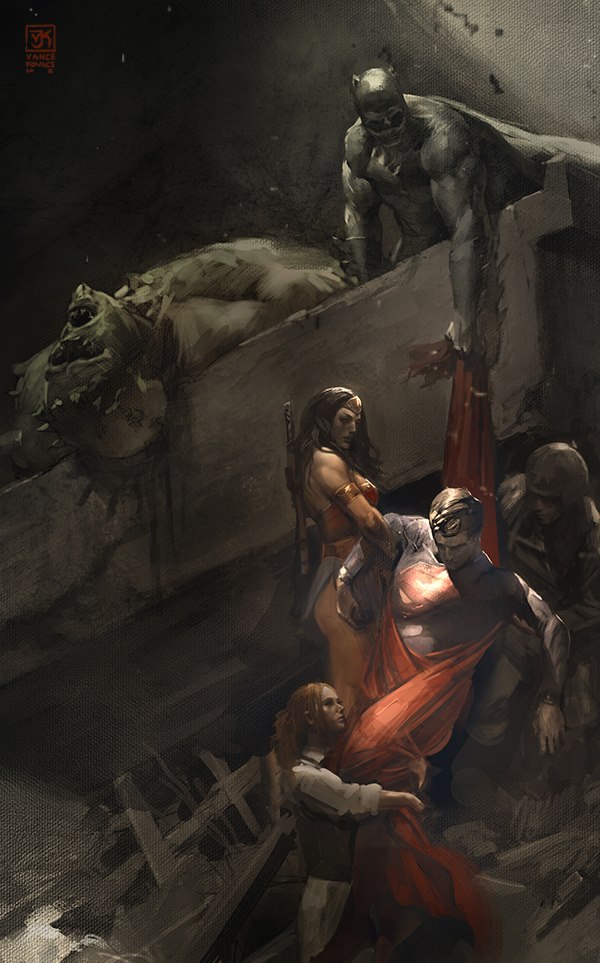 "Unfinished. A crop of a much larger composition. I was reluctant to share this one for many reasons. . It didn't turn out the way I had hoped. I may return to it some day...

In homage to Rembrandt's The Descent From The Cross."

Finally, after a deleted Batman v Superman scene revealed what other earth-ending threats could be on the way thanks to Lex, a statement by his company proves even more cryptic..

UPDATE: Supposedly the Lex Corp IG account was a fake and it has disappeared. No confirmation from the studio either way, and while people are citing that it wasn't a verified account, neither is the @alexanderluthor one rt'd by the official Batman v Superman twitter account.

Due to unfortunate circumstances, LexCorp Industries will be temporarily suspending its global operations. When interviewed about his actions against a fallen alien, Lex Luthor responded with; "Ding, ding, ding, ding. Are we entering the second round?" We do not understand Mr. Luthor's actions and LexCorp does not take responsibility for his actions. Thank you for being patient.
A photo posted by LexCorp (@lexcorpindustries) on Mar 30, 2016 at 6:27pm PDT

Filming on Justice League is just days away!
Posted by Blog Administrator