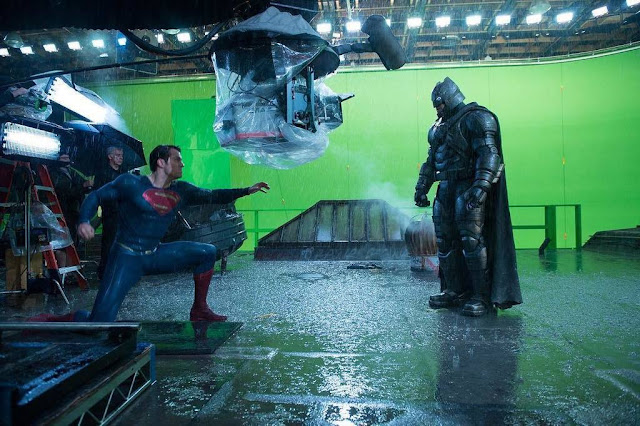 
This is a great way to kick off the weekend. Photographer Clay Enos has posted this awesome behind the scenes look at Batman v Superman. It's part of his interview with Playboy magazine, where he shares some cool details about his work on the film:

Of the three leads in Batman v Superman—Henry Cavill, Ben Affleck, and Gal Godot—who was the easiest to shoot?

It’s hard to say. Gal is so beautiful and strong and awesome. She’s a ton of fun and she’s new to the genre of superhero films. But then Henry is the spitting image of the Superman that you have in your head. It’s crazy. When he’s got his cape on and he’s in full costume, you’re shooting Superman. The only other male icon that’s in your head for your whole life is Santa Claus. And then Batman is a giant, hulking awesomeness of dark who presents challenges because his costume is dark. He’s also so awesome that you let it go. On some level it’s just a chin for Ben as Batman. But what a chin it is.


Since we just found out that Zack and Henry are still very much looking forward to Man of Steel 2 happening down the road, we are really hoping one of those slots belongs to the film. Go Supes!

But first things first: Justice League begins filming next week, and Aquaman himself shared some of his excitement about being part of the film while talking to ET:

Momoa will be back in that "s**t" soon, as cameras start rolling on the first Justice League movie next week. What he looks forward to most about teaming up with Batman (Ben Affleck), Superman (Henry Cavill) and Wonder Woman (Gal Gadot) onscreen won't surprise you -- it's the action.

"I like fighting. So, I'm looking forward to being a superhero and just fighting," he teases.

Good Justice League battles are what we're here for, but whether they involve Lex Luthor remains to be seen. Jesse is not talking... but his answer to Vulture does prove revealing:

You said you would like to play Lex Luthor again. Is that in place yet, or is it up in the air?

I have an ankle bracelet on that's connected to the Warner Brothers precinct, so forgive me for being evasive.

Hmm.. we have a feeling Lex is not gone for good. As for Supes, Blastr seems to know where he'll end up in this next installment.

Using his own words, I posit how Zack Snyder will send Superman to the Darkseid #batmanvsuperman https://t.co/1wucz4JyYz
— Aaron Sagers (@aaronsagers) April 6, 2016


Not even gonna lie: We're all for the Superman heroics, but bring on the dark and moody! (at least for a little bit). So far we are loving Henry's development of the character, and we can't wait to see where it will lead next. In the meantime, we'll be in the theater watching Batman v Superman for the 5th.. or is it the 10th time?  -- DO NOT miss it in IMAX.
Posted by Blog Administrator