We Have A Lex For Our Supes: What We Learned From The Twitter Reaction

It certainly came out of left field..

Meet your new Lex Luthor! Warner Brothers announced today that Jesse Eisenberg has been cast as the villain in the YET TO BE NAMED (yes, we're using all caps psst.. Warner) Man of Steel sequel. Jeremy Irons will play Alfred. As you can expect, reaction to Eisenberg's casting in the iconic role was mixed.

After the dust settled, we decided to point out fun facts we learned on twitter today. Some of the criticism directed at Jesse (we're on a first name basis now) was that he looks too young to play Lex opposite Henry as Superman. But as many of you pointed out, they are the same age (30).

elmayimbe@elmayimbe
LEX LUTHOR IS A HIPSTER.

But that may be exactly what director Zack Snyder is looking for. This is him describing his casting choice in the press release:

Lex Luthor is often considered the most notorious of Superman’s rivals, his unsavory reputation preceding him since 1940. What’s great about Lex is that he exists beyond the confines of the stereotypical nefarious villain. He’s a complicated and sophisticated character whose intellect, wealth and prominence position him as one of the few mortals able to challenge the incredible might of Superman. Having Jesse in the role allows us to explore that interesting dynamic, and also take the character in some new and unexpected directions.” 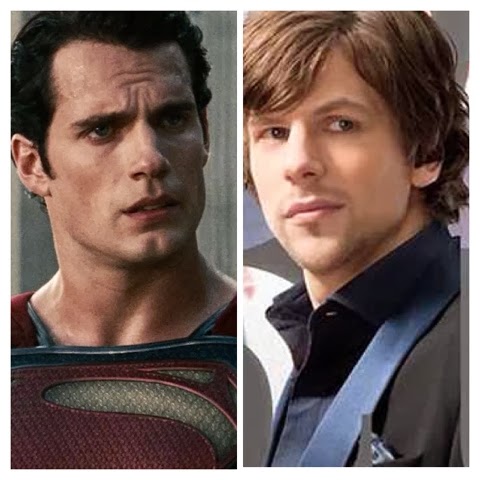 Unexpected directions?.. we like!, after all that's where Zack took Man of Steel and look where we are now. Entertainment Weekly makes a great case for Jesse as Luthor, so give them a read.

One thing we found pretty interesting, is that Henry's publicist is very much in the business of representing DC superheroes and their counterparts.

Go Jen! (as we ponder if we made the wrong choice by going into news writing instead of publicity).

So far 2014 has been a roller coaster ride for fans, but we have to say we are enjoying every second of it. And then there's this.

Daniel Alter@DAlter007
Best thing that ever happened to #BatmanvsSuperman and the #JusticeLeague universe was this delay.

There's always a silver lining. Keep up with everything Man of Steel 2 in this handy link we've put together for you. Stay tuned for the latest out of Detroit, where Henry is now preparing to become the Man of Steel once again.. beard included we hope ;)

Email ThisBlogThis!Share to TwitterShare to FacebookShare to Pinterest
Labels: All About Henry, Casting News, Gif Love, Just for Fun, Man of Steel 2