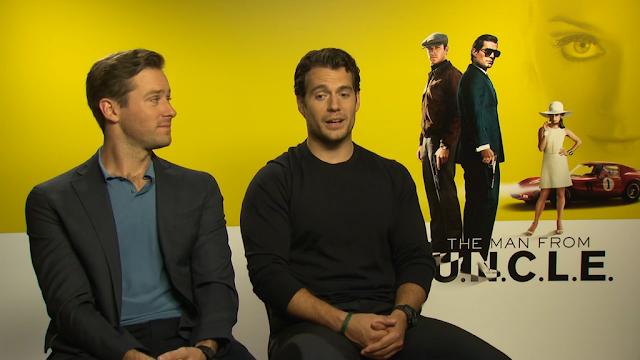 Interviews from day 2 of the The Man from U.N.C.L.E. press junket in London are starting to come in (don't miss everything from Day 1). First up, Henry puts an end to the rumors he's involved in the Fifty Shades of Grey sequel. WATCH (and read the transcript). UPDATE: He later admitted to USA Today that he was just messing with everyone!

Henry and Armie talk to ScreenSlam about their toughest scene to film (sounds pretty hairy) and more. WATCH.

WATCH Henry.. err really Armie and Elizabeth, try and tell CNN what U.N.C.L.E. is all about in less than three minutes. (We promise, Henry does speak in there).

The Movie Times: Henry talks about "Americanizing his accent" (started out as Clark Gable), his favorite car to drive in the film, why doing his own stunts is not always the best option. WATCH.

Trailer Addict has shared more of the EPK interview (above), and it's full of cool details. Henry talks about filming in those suits he wore and why it wasn't that easy and more! - WATCH.