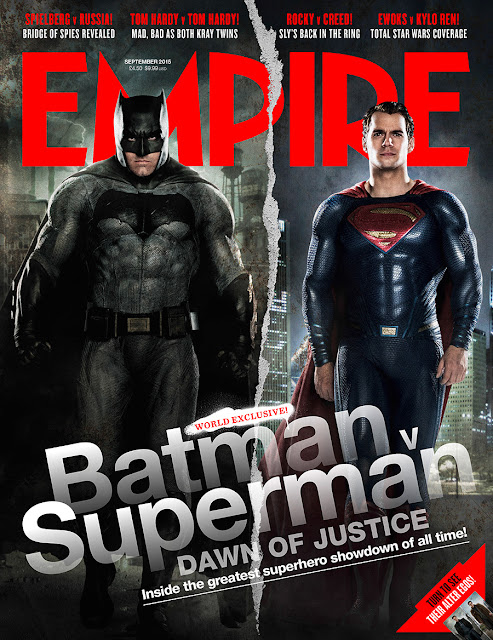 We've been so busy with promotion for The Man from U.N.C.L.E., but we're not forgetting Supes!

We're now just 8 months away from the release of Batman v Superman, and if it goes anything like the promo for Man of Steel, get ready for some fun stuff.

Empire magazine has just revealed the cover for their September issue that goes on sale Thursday, and it's pretty awesome! -- Just ask the boss..

Ben Affleck’s Dark Knight is pictured against a murky and distinctive Gotham cityscape. “There is just this gravitas to Batman,” director/producer/franchise oversees Zack Snyder stresses in our cover feature. “He is operatic.” And Superman? " In this movie, everyone has split into different directions as to how they feel about this alien," explains Henry Cavill. "Some people love him, some hate him. Other people fear him. Is he a tyrant?"

At the heart of Empire's access-all-areas coverage this month is a trip to the heart of the Batman V Superman brains trust and a chance to meet the man piloting this superhero behemoth, as well as his stars, and get the scoop on the origins, development and execution of this unprecedented super-mash.

Of course, the blockbuster also introduces Gal Gadot’s Wonder Woman and Jason Momoa’s Aquaman in a way that will then spin directly into The Justice League. To any doubters, Snyder is keen to stress the methodical, planned through-line that supports this newly expanded DCverse. “I want all the other directors of the other films to be able to stretch their legs and do what they want, but at the same time there is a big interconnected universe."

The cover is the work of the talented Clay Enos. We can't wait to see what else he has in store for us.

Again, the new issue of Empire hits newsstands on Thursday. Buy it here. We'll share the scans as we get them. Go Supes!