Fifty Shades: Henry Admits He Was Just "Messing With Everyone" 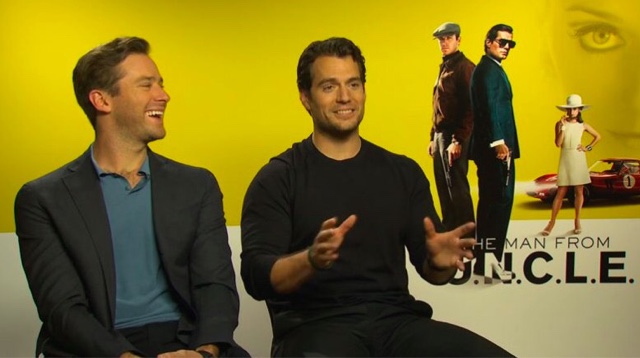 Henry has reaaaally come clean about the firestorm he ignited, after he played coy about being part of the Fifty Shades of Grey sequel during the junket for The Man from U.N.C.L.E. in London. The internet went bananas, and after briefly clarifying things in an interview -- he's now telling the whole story to USA Today:


Henry Cavill has been messing with our heads about Fifty Shades of Grey.

Just days ago, Cavill made the Hyde casting rumor go into overdrive when he was asked about it during the Man From U.N.C.L.E. press junket in London. He was supremely coy.

“Basically what I can say is I can’t say anything about it right now,” Cavill told E! News on camera.

That answer sent the internet and Fifty Shades fans into a tizzy. In a great piece of television, even Cavill’s co-star Armie Hammer seems genuinely shocked by the revelation.

Now Cavill tells us he was fibbing, joking, taking the mickey. Whatever you like. He tells USA TODAY:

“I’m not in ‘Fifty Shades of Grey.’ I’m for real. I’m just messing with everyone.”


Cavill says he decided to go there since before the first Fifty Shades he was harassed about taking the lead role of Christian Grey. No one believed his denials then.

“The first time around, everyone was asking, ‘Are you Christian Grey?’ I went ‘No!’ But no one cared and everyone kept talking about it. This time around, everyone is now still convinced I’m part of the series. Now the question is, ‘Are you going to be in ‘Fifty Shades Darker. ‘ And I thought, I’m going to try a different tact this time. See what they say. And so I tried a different tact.”

So here’s where the fib or “go” comes in.

“I thought I’d give everyone a go and then tell everyone the truth a moment later. It’s not going to change.”

Cavill says he has enjoyed watching the reaction to this week’s comments spiral out-of-control online, calling it “extraordinary.”

“I’m going to do something like this again in the future and make a real social experience out of it.”

Surely there must be a role in E.L. James’ new book Grey that we can ask Cavill about. To be continued. Maybe this story will even change again. Superheroes. You can’t trust them.

USA Today, you outdid yourself.. just like Henry! -- Don't miss the captions under the pics in their story.

We're going to laugh about this for days.. months even. And then start worrying about the next time we get to talk to him and whether he's punking us! -- Henry, Henry, Henry..

@HenryCavillNews @USATODAY I love this man, and his sense of humor!
— Courtney Jensen (@packergirlie) July 24, 2015

@nerdlordcavill @HenryCavillNews LOL and I was thinking in watching the first one just for him
— Lord Tyrell (@LuisThirdWorld) July 24, 2015

Email ThisBlogThis!Share to TwitterShare to FacebookShare to Pinterest
Labels: Goofiest Superman, Henry is THE man, Just for Fun, The Man from U.N.C.L.E