Today brings two new The Man from U.N.C.L.E. TV spots for the Philippines, with a witty Solo in both..


"That's what I love about this place!" said the actress, who was born in Sweden. "Because everyone is the sweetest. Everyone is walking around with smiles on their faces, and so passionate. Dedicated fans. It's really amazing being here and seeing that." 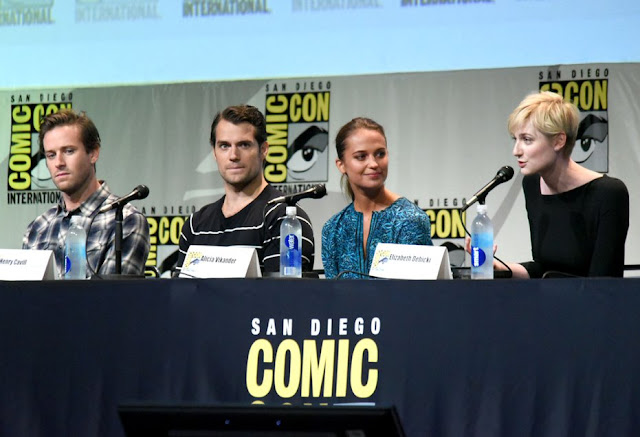 Elizabeth also mentioned working with director Guy Ritchie, and her surprise after watching the film:


Both actresses said Ritchie's film set was a collaborative and relaxed environment, though Debicki is convinced "Guy's brain works at a different pace (than) most human beings."

She and Vikander were both surprised by the final film.

"He cut it in a way that only Guy can, and he added a soundtrack that only Guy could imagine," the French-born Debicki said. "So we both had the same experience when we watched the film, like, 'Oh, that was what we made.'"


Read the rest of the interview, and don't miss everything else from Comic-Con. And check out who just gave The Man from U.N.C.L.E. a shout out..

Excited to see The Man from U.N.C.L.E! @guyritchie @davidbeckham 😏 x vb #MANfromUNCLE
A photo posted by Victoria Beckham (@victoriabeckham) on Jul 20, 2015 at 8:33am PDT

David makes a cameo appearance in the movie. Today the press is gathering in London for the apparent junket tomorrow, and some journalists got to watch the film.


We are currently prepping the kit for #TheManFromUNCLE press junket that runs 2 days this week pic.twitter.com/G9orKPpvRp
— Video Europe (@videoeurope) July 20, 2015


Finally, have a question for Henry? now is the time to ask it..


Get the inside scoop from the men from U.N.C.L.E., #HenryCavill & #ArmieHammer. Send your questions using #AskUNCLE. pic.twitter.com/oAti75EMee
— The Man From UNCLE (@ManFromUNCLE) July 21, 2015


Look for updates as we get them!