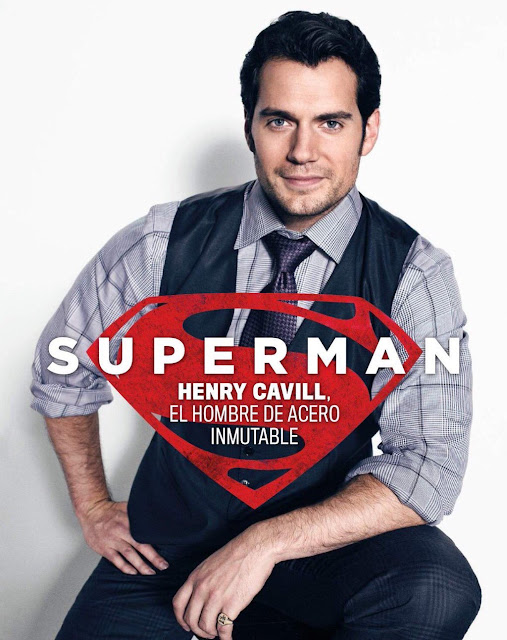 The March issue of Mexico's Cine Premiere magazine has a new photo and interview with Henry, and what we can say.. he's one hot Clark Kent!


Click to read the interview (in Spanish). We'll translate it for you by tomorrow UPDATE: Translation added below. Henry chatted with the magazine while he was filming Batman v Superman (reporter mentions Kal was there). Henry talks about his stunt training, reading message boards and the back and forth reaction by fans to Man of Steel. He also mentions his love for Mexican food. 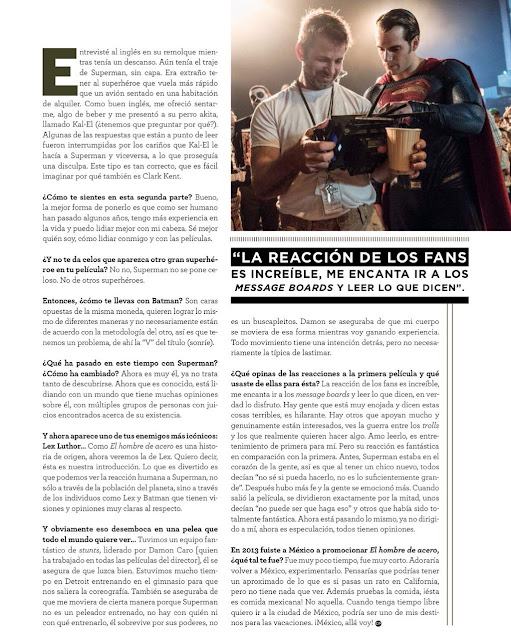 Here is our translation (keep in mind it's already been translated once from English into Spanish, so it's not perfect).

I interviewed the Englishman while he took a break in his trailer. He still had the Superman suit on, without a cape. It was strange to have the superhero that flies faster than a plane sitting in a rental room. Like a good Englishman, he offered me a seat and something to drink, and he introduced me to his Akita named Kal (Do we really need to ask why?). Some of the answers you're about to read were interrupted by the signs of affection Kal would show Superman and viceversa, followed by an apology. This guy is so proper, that it's easy to imagine why he's also Clark Kent.

How do you feel in this second part?

Well, the best way to put it is like being human - a few years have gone by, I have more life experience, and I can deal with my head better. I know who I am, and how to deal with myself and the films.

And you're not jealous of having another great superhero in your movie?

No, no.. Superman doesn't get jealous. Not of other superheroes.

So then, how do you get along with Batman?

They're opposite sides of the same coin, they want to accomplish the same in different ways and don't necessarily agree with each other's methodology so then we have a problem, which is the "v" in the title (smiles).

What has happened in this time with Superman, how has he changed?

Now he's very much himself, he's not trying so much to discover himself. Now that he's known, he's dealing with a world that has many opinions about him, with multiple groups of people with judgements about his existence.

And now appears one of your most iconic enemies: Lex Luthor...

Since Man of Steel is an origins story, now we'll see Lex's. Meaning this is our introduction. What's fun is that we can see the human reaction to Superman not only through the earth's population, but through individuals like Lex and Batman who have very clear visions and opinions on the matter.

And obviously that leads to a fight that everyone wants to see...

We had a fantastic stunt team lead by Damon Caro (who has worked on all of the director's films), he makes sure it looks good. We spent a lot of time in Detroit training in the gym, to pull off the choreography. He would also make sure that I moved a certain way, because Superman is not a trained fighter. There is no one or what to train him with, he survives thanks to his powers, he's not a troublemaker. Damon would make sure that my body would move in that way, while I'm gaining experience. Every movement has an intention behind it, but not necessarily the typical to injure someone.

What is your opinion on the reactions to the first movie, and what did you take away from them for this one?

The fan reaction is incredible, I love going to the message boards and reading what they say, I really enjoy it. There are people that are very upset and they say terrible things, it's hilarious. There are others that show a lot of support and are genuinely interested, you see the fight between the trolls and the ones who really want to do something. I love reading it, it's first class entertainment for me. But their reaction is fantastic compared to the first one. Before, Superman was in everyone's heart, so then they had the new guy and everyone would say, "I don't know that it can be done, he's not big enough." Then there was more faith and people started getting more excited. When the movie came out, they were divided exactly in half. Some would say, 'I can't believe that he's doing that" and others who thought that it was totally fantastic. The same is happening now, not so much directed at me, now it's speculation - everyone has opinions.

It was very little time, it was very short. I'd love to return to Mexico and experience it. You would think that you'd have an idea of what it's like if you spent some time in California, but it has nothing to do with it. Then you try Mexican food, this is Mexican food! - not that other one. When I have some free time I'd like to go to Mexico City, it could be one of my vacation destinations. Mexico, I'm headed your way!

See the rest of the scans that include an interview with Ben and Gal.

A huge thanks to Sergio!