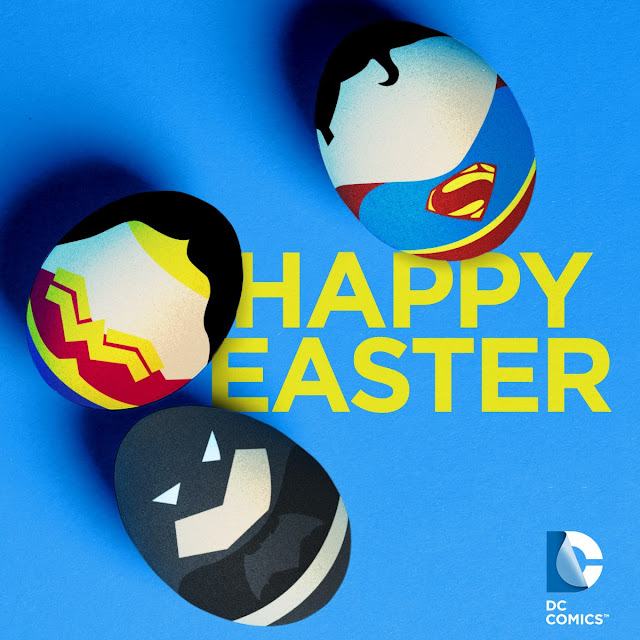 Happy #Easter! Have you seen #BatmanvSuperman yet? Because there are some DC Easter Eggs hiding in there... pic.twitter.com/XpwBnQaWGD
— DC Comics (@DCComics) March 27, 2016

It's been an awesome holiday weekend here at HCN, as we've been keeping you updated on the latest record-breaking numbers for Batman v Superman across the world:

In a much-needed win for Warner Bros., Zack Snyder's Batman v. Superman: Dawn of Justice— introducing Ben Affleck as the Caped Crusader and returning Henry Cavill as the Man of Steel — opened to a massive $170.1 million from 4,242 theaters, a defining moment in DC Entertainment's battle to compete with Marvel's superhero universe. It also helped deliver the biggest Easter weekend in history, up 13.5 percent over last year's record level, which was fueled by Furious 7 (..) If the $170.1 million estimate holds, it will also be the biggest start ever for Warners, edging out the final Harry Potter film ($169.2 million). And it easily bested the $152.2 million debut of The Hunger Games: Catching Fire in March 2013 to boast the biggest pre-summer debut in history (..)

"There is no question this is an extraordinary achievement," said Warners domestic distribution chief Jeff Goldstein. "Clearly, audiences have embraced it and we are already seeing repeat business. It's just fun. Often, there's a disconnect between critics and audiences."

The stunning debut of the $250 million colossus provided a super start for Warner Bros. and Chairman Kevin Tsujihara‘s five-year strategy built on a DC Comics Universe: spend hundreds of millions on 10 Justice League superhero movies to make billions at the box office and more from on-demand and TV rights, licensing and merchandising for parent company Time Warner Inc., as Marvel Comics have done for Disney.

“When you swing for the bleachers and connect, it’s a tremendous feeling,” Jeff Goldstein, Warner Bros. distribution chief told TheWrap Sunday. “This felt like we were launching several films, so to come through like this makes all of us very proud.”

In addition, there’s a lot to be said for this Easter release date, and Warner Bros. decision to book a summer blockbuster on it. “The beauty of this date around the world versus summer is that you don’t have titles before and afterward. When you kick off Easter, you’re all by yourself. We have all this head room moving forward,” beamed domestic distribution Warner Bros. chief Jeff Goldstein. F7 played at No. 1 for four weeks before Avengers: Age of Ultron opened during the first weekend of May. Hopefully, BvS can do the same and not be tripped up by Disney’s The Jungle Book and Uni’s The Huntsman: Winter’s War.

Read more on how the numbers broke down below.

Congratulations to Henry and the rest of the cast and crew of Batman v Superman. Henry is already preparing for Justice League, which begins filming April 11. Today his trainer (Michael Blevins) shared a pic from their previous work together, hinting on what's to come (don't miss our interview with him).

It's talked about like it's fantasy, portrayed as fictional, yet reality requires real physical transcendence. So here we are, ready to go again, to go deeper, to become better, or as exceptionally poetic actors have lamented for centuries: 'Once more unto the breach, dear friends, once more ...stiffen the sinews, conjure the blood.'
A photo posted by Timothy Michael Blevins (@gritandteeth) on Mar 27, 2016 at 10:09am PDT

We also have a few updates from some members of the Justice League.. who knew Cyborg was this funny. We have a feeling Ray Fisher is going to get along just fine with Superman.


Jason Momoa posted an Easter greeting for fans. Check out his Instagram for more cool updates as he trains to become Aquaman in Justice League.

Happy Easter from cyborg and aquaman. @rehsifyar Aloha ALI'I
A photo posted by Jason Momoa (@prideofgypsies) on Mar 27, 2016 at 5:03am PDT

We have some Easter eggs for you as well -- Okay, more like several really great articles and this video below that break down what you may have questions about after watching Batman v Superman. Fair warning, it's only going to get you more excited for what's to come! -- SPOILERS AHEAD.


This one is filled with really cool details on how director Zack Snyder threw people off on what was going on during the filming of Batman v Superman. Sneaky!


More on the film's ending and its connection to Justice League from Collider and Entertainment Weekly.


The Batman v Superman director also revealed some of what's included in the "Ultimate Cut," that you can NOW PRE-ORDER ON AMAZON -- HERE'S THEIR COLLECTOR'S EXCLUSIVE.

Finally, Zack also talked to Collider about the production schedule for Justice League and its official title. Check it out on their site and stay tuned for updates, as we begin our countdown to the start of filming at the Warner Bros. Studios outside of London.